Since my graduation from Streetsville Secondary School (SSS) about a decade and a half ago, the self described "Village in the City" has undergone some substantial changes. Once a quaint, quiet residential neighbourhood, it’s now a neighbourhood with a diverse and growing population.

As Mississauga moves forward with this vision of "building up rather than building out,” it is inevitable that in order to densify, it needs more diversified housing forms—like townhouses and other housing forms—shifting away from the single detached homes we traditionally have seen.

Even now, new townhouse complexes are springing up everywhere, and one of those developments is at 80 Thomas Street, at the intersection with Joymar Drive right by SSS. As the corporate report received this week at Mississauga's Planning and Development Committee (PDC) states, the property at 80 Thomas was previously home to CTS Corporation, a designer and manufacturer of electronic components. It was one of the few remaining industrial properties in a mostly residential area of Streetsville.

The lands to the south were developed during the mid 20th century, while the lands to the north and west were redeveloped more recently in the mid-2000s. The building associated with CTS Corporation was demolished in August of 2016, and this is what the site currently looks like:

The application came from Dunpar Homes, and it requests the construction of 14 semi-detached homes, 57 standard townhomes, and 130 back to back townhomes, totalling 201 units on a 6-acre site along a private condominium road (Dunpar's spokesperson said they do not build stacked townhouses). The development, called the "Streetsville Centre" site plan can be seen below: 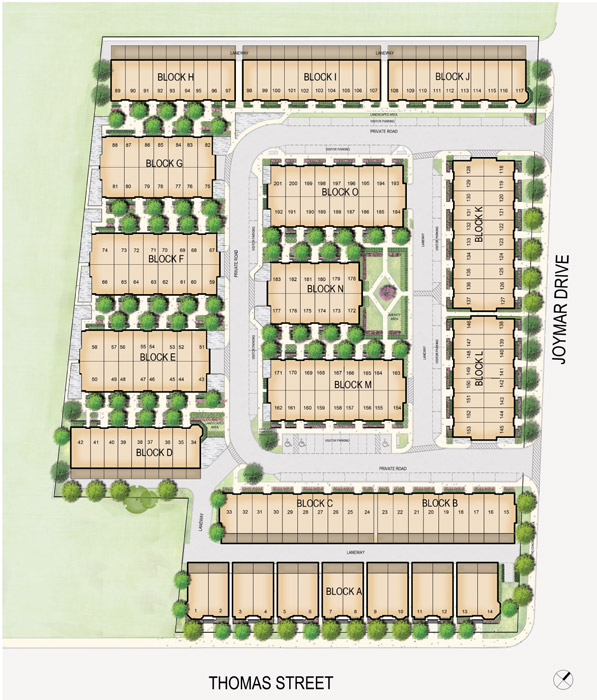 A community meeting was held by Ward 11 Councillor and Streetsville resident George Carlson back on November of 2016, and residents outlined the following concerns:

There's no need to go further into each individual concern raised because they sound like the standard issues that get raised each time that there is a new development, although the environmental contamination is perhaps the outlier as this is being built on a previous industrial site. However there are two overall issues I feel should be addressed. The first major concern should be the traffic issue as it pertains to safety of pedestrians.

The presentation stated that the complex is about 250 metres from the Streetsville GO station, so literally across the street. I used to work downtown when I lived near Streetsville, so I would use this GO station quite regularly. That area does get quite busy during peak hours, and that was back when there were less residential townhomes nearby. If the developers envisioned people living in the new complex walking back and forth to the GO station because they want to promote that particular non-car lifestyle, they really need to ensure that traffic calming measures, as well as proper traffic lights, are put in place to ensure people's safety when crossing the street.

The second matter is regarding the complex itself. Several people raised issues that there is a lack of adequate parking, or that there seems to be only one access point (aka a door) per unit, or that the development overall is too big for such a small parcel of land. My girlfriend lives in a stacked townhouse complex in Toronto, and while back to back and stacked are different kinds of developments, her complex also has some challenges pertaining to having enough room for residents. There is one main route that goes through the whole townhouse complex and it is always parked with cars, everyone shares one garbage disposal area outside, but at least there is a nice open park for dogs and children.

But that kind of development fits into the character of the City of Toronto, as there is accessibility to public transit as more people in Toronto downsize to having just one car, or ditch cars altogether. As for Streetsville, I believe it may be a few more decades away before the next generation who would move into this Dunpar development adopt that mindset, and the people who might chose to have only one car or no car who move there have the GO station as their public transit option.

Hopefully, as Streetsville transforms in the coming decades, city builders and planners can do so responsibly in providing quality homes for current and future residents.

Header photo courtesy of Active-Life.ca, and is a rendering of one of Dunpar's Oakville developments. The picture provides a sample of what a standard Dunpar development looks like.