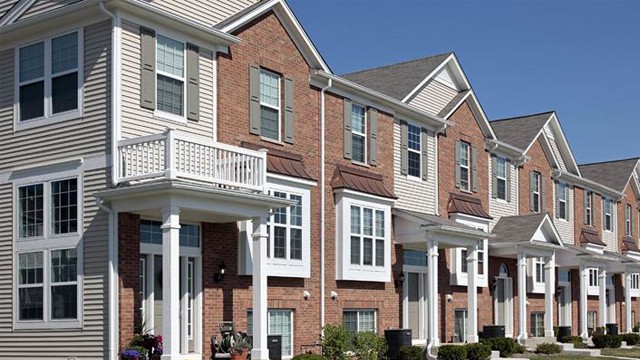 This week’s Planning and Development Committee (PDC) meeting featured another development application coming before City Council, and once again the applicant (aka the developer) is appealing before the OMB, with a smattering of residents concerns and comments as well. Council’s position on this application, as stated by PDC chair Councillor George Carlson, is that they are opposed to the current development as it stands.

This is what the proposed development site looks like now. It is located at 1101-1125 Clarkson Road North, where it intersects with the Lakeshore GO train route.

The corporate report also contained other images of the site, from an aerial perspective. All these existing properties are addressed on Clarkson Road North: 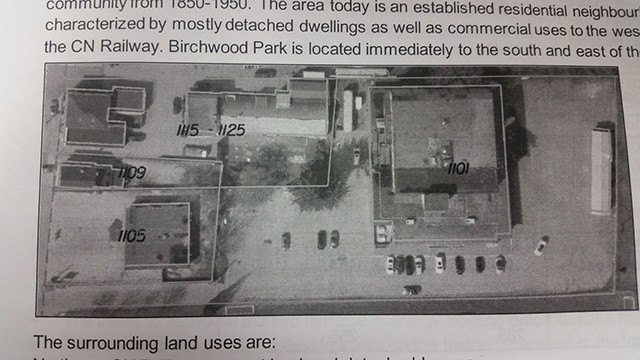 To be honest, there isn’t really much there now. Currently 1101 is a yoga studio, 1105 is a vacant 1 storey building, 1109 is a vacant 2 storey building (but was a former butcher shop), 1115 is the Destiny Wellness Centre, and 1125 is an outdoor storage site for an electrical contracting business. Locally known historically as ‘Clarkson Corners’, this particular area functioned as a service stop on the railway during the 19th century.

Here is a wider angle shot of the area. You can see that the elements of it being a former railway stop. The site is also currently adjacent to Birchwood Park: 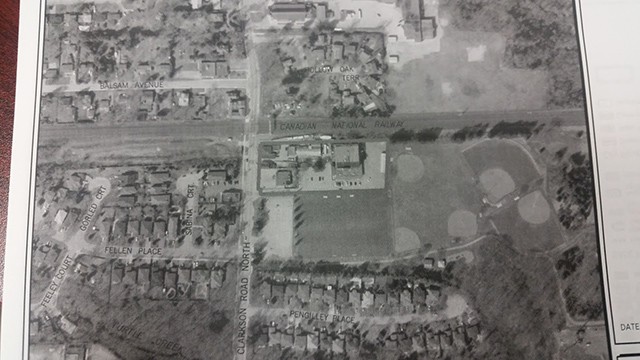 And below is the proposed redevelopment on the site: 136, 4 storey back to back stacked townhouses from KFA Architects & Planners: 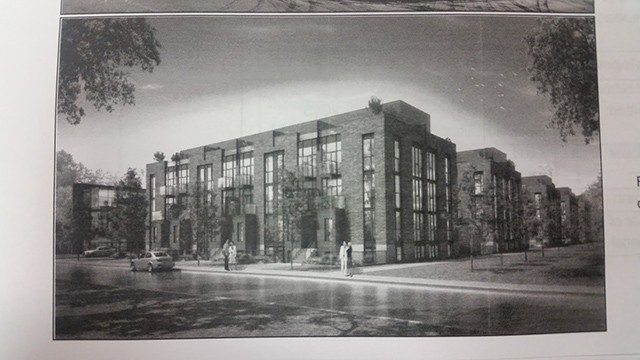 After this presentation from the planners and outlining the recommended city position, the applicant (KFA Architects) had their lawyer, Patrick Harrington from Aird & Berlis LLP, provide a response that their client, despite going to the OMB, is still talking to Mississauga city officials to see if some compromise could be reached. Harrington cited the example of his client setting up crash walls along the northern boundary of the site, and providing access to underground garage as a sign of his client’s willingness to cooperate. There was also talk of how they needed Metrolinx approval before more suitable parking entrances could be added.

So what concerns did residents have about this proposed redevelopment? Councillor Karen Ras, who represents the area, held an initial public meeting on June 22 last year, and the Committee heard more concerns from residents in attendance. They mainly centred around the following:

The comments from residents weren’t all negative or opposed to the development. A 71 year old empty-nester named Terrence was actually asking when would the building be built and how much longer the wait. He’s lived in that area for over 30 years and seen everything come and go on that property (such as a potato warehouse and a gym), and wouldn’t mind moving into something new. Terrence also asked council where he could buy a townhouse in Mississauga, but I’m pretty sure that’s outside the council’s purview.

Sue Shanly, speaking on behalf of the Ward 2 ratepayers associations, mentioned how Clarkson is rebranding itself as a historic village of Mississauga and how the old railway site serve as a bridge to remind everyone of those beginnings. Shanly along with others in the audience shared the view that the heritage characteristic of the village would be affected by this proposed development.

Regarding the concern that the development would negatively affect Birchwood Park, I think the higher negative affect would be for the new residents of the townhouses. Birchwood Park is the location for five baseball diamonds. Can you imagine what would happen if some kids playing baseball or softball hit the ball hard enough that it crashes through someone’s window. You can see on the map below that there is at least 3 baseball diamonds right adjacent to the site.

On the plus side, there is an open soccer field as well, so residents in the townhouses would not have to travel far to enjoy at least one recreational activity.

Issues around traffic always come up, but considering that this site is adjacent to a railroad track that is still active thanks to the Lakeshore GO train, traffic concerns should be taken a little more seriously. A man named Charles, who indicated he lived in the area for 35 years, said he just wanted safe traffic, and perhaps traffic calming measures could be implemented.

As for the viability of the commercial space, this may be more to do in relation to that historical character mentioned earlier. The proposed development calls for 20,588 square feet of commercial space, and the remaining 163,906 square ft which will be residential. While I’m sure that the proposed commercial space is quite suitable, the real issue goes back to the historic character of Clarkson; there’s something about seeing the remnants of an old railway station in Canada’s sixth largest city that anchors our community and provides that reminder of the foundation upon which Mississauga was built.

This proposal will now go before the OMB, so as more updates coming forward regarding this development we will keep you posted.