Getting up close and personal with the city we love just got way easier with the launch of a series of self-guided cycling and walking tours developed for and by Hamiltonians.

Steeltown Tours launched earlier this month and is a set of three self-guided tours developed over the summer of 2021 that explore Hamilton’s history, culture and culinary scene from the seat of one’s bike or on one’s own two feet.

What’s even better is that these meticulously planned and informative tours are FREE.

Jamie Stuckless, the owner of Stuckless Consulting Inc., the company that researched and developed Steeltown Tours, told InTheHammer that the idea came from her own experience of cycling and walking around the city.

“I’ve always walked and biked everywhere,” she said. “I wanted to share some of that experience with people.”

Stuckless’s experience in the arena of active transportation is quite extensive as she has worked for more than a decade in the sector in cities across Ontario.

Her role in informing and guiding municipalities in developing active infrastructure led to the creation of her consulting firm which is currently working with municipalities and organizations across North America.

In Hamilton, Stuckless is well known for her advocacy for safer streets for cyclists and pedestrians.

“Hamilton has made some really important investments in cycling and walking infrastructure in the last few years,” she said, noting how the two-way conversion of Queen Street, in particular, has greatly improved safety along that corridor with enhanced crossings at Napier, Hunter and Herkimer.

“Progress is being made, but in order to attract people who aren’t confident cyclists, more investment needs to be made.”

Part of the reason Stuckless said she developed the tours, alongside Mackenzie Mailhot, a McMaster student who worked with Stuckless over the summer, was to highlight the ways in which cyclists and people can safely get around Hamilton.

“With the ongoing implementation of new trails and bike lanes, it can be overwhelming for people,” she said.

“[The tours] help people connect to these and possibly help them discover new routes around the city.”

The issue of accessibility in and around town has also been top of mind when creating the tours as Stuckless sees them as an opportunity to expose people to the different amenities that one wouldn’t normally come across when getting around town in a vehicle.

Stuckless and Mailhot spent countless hours traversing Hamilton’s roadways and sidewalks, trying to map out the safest, most efficient and easily accessible routes through Central Hamilton, even taking the time to map out public restrooms and other amenities that participants might not know of but will undoubtedly need access to after a couple of hours on the route.

“Some more seasoned cyclists might find the routes a little circuitous,” she said, noting that when they were designing the routes they wanted to take advantage of the safety infrastructure in place.

“We wanted to make sure [the tours] were comfortable routes.”

Tours are even available in varying lengths — anywhere from 28 km to 5 km — and each offer a unique experience through the city. The maps are accessed via the Steeltown Tours website and can be downloaded to a personal device. 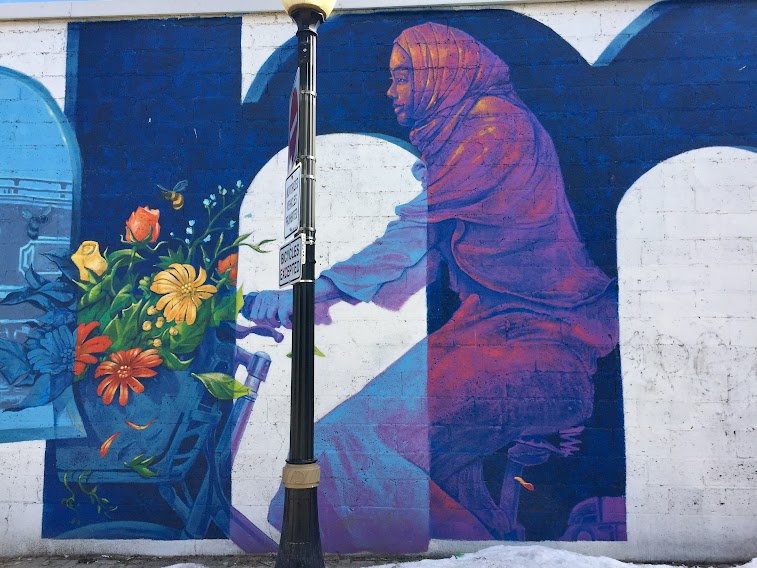 The maps are interactive with background information available about each of the stops on the route. Drinking fountains, public restrooms and specific safety reminders are also laid out on the maps.

One tour invites participants to explore Hamilton’s green spaces and outdoor art and another was inspired by the 2020 book ‘Reclaiming Hamilton: Essays from the New Ambitious City,’ and features a destination for each essay in the book.

Walking tours will also be available in the coming weeks, Stuckless said, and these tours will focus on Hamilton’s ever-changing culinary scene. These will be approximately 2 kms in length and were developed in consultation with one of Hamilton’s most beloved foodies, Joyce of Cooking.

“These routes not will not only be bringing people to businesses and parks, but will highlight impactful projects in Hamilton,” Stuckless said, explaining that stops will include places like community pollinator gardens as well as provide opportunities for participants to connect to Hamilton’s community fridges.

“The last 18 months has really grounded a lot more people in their communities and they’re staying closer to home,” Stuckless said.

“The tours are designed to connect people to the intricacies of their neighbourhood, their community.” 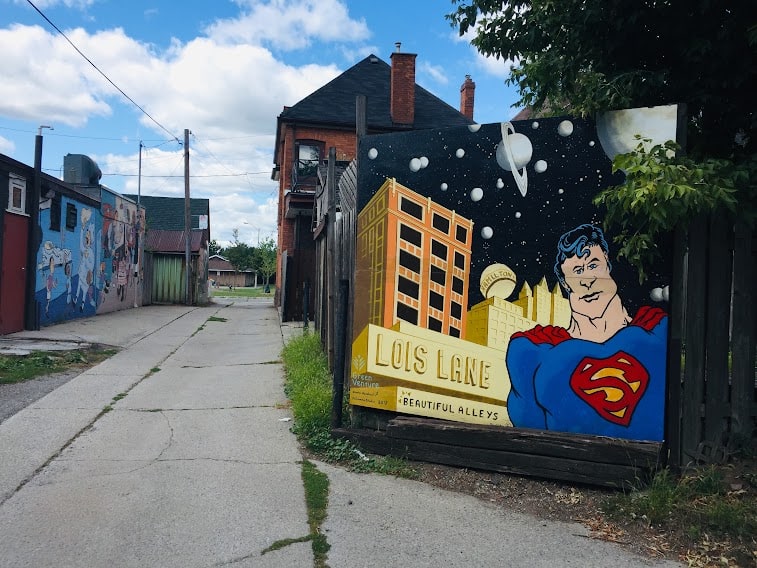 This is one of the alleys featured on Steeltown Tours’ Reclaiming Hamilton tour. — photo courtesy Jamie Stuckless Consulting Inc.

She said that while the tours that are currently available are concentrated in lower, central Hamilton, Stuckless would like to see the next phases of this project to take Hamiltonians to other parts of the city like the mountain, Stoney Creek and Dundas.

So far, though, Stuckless said the response to Steeltown Tours in its early days is very positive and already word is getting out on social media.

Even Environment Hamilton has connected with Stuckless and will be featuring some of her routes on Oct. 3 for its Carbon Cycle, Walk & Roll 2021 fundraising event.

“This is really exciting because this was exactly the type of thing I was hoping to see,” Stuckless said of the partnership.

To learn more about Steeltown Tours and to download maps, visit Steeltowntours.ca. More about Environment Hamilton’s Carbon Cycle, Walk & Roll 2021 and how to participate, visit the organization’s website.