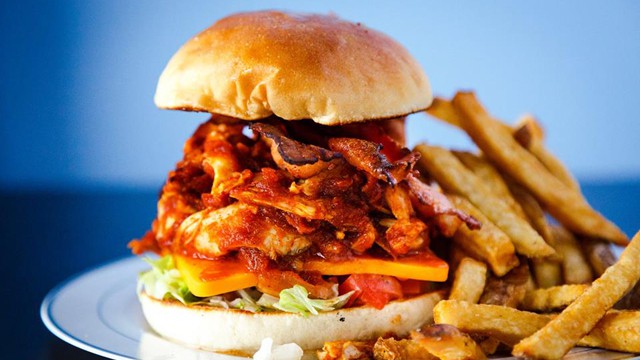 When you think of street meat, you might think about going to town on a foot-long hot dog before a Jay’s game or after a long night of clubbing.


When you think of street meat, you might think about going to town on a foot-long hot dog before a Jay’s game or after a long night of clubbing. You might even think of satisfying a hearty craving after a hectic hour at a local Costco or Canadian Tire.

Even if you have fond memories of curbside sausages, you probably never associated the scrumptious meal with freshness and variety.

Now, a Brampton entrepreneur is looking to change that.

“The reason [we put street meat in our name] was to attach street cuisine to a storefront location. When people think of street food, they think of hot dogs and sausages. We do fresh cuisine right in front of you,” says Jonathan Boone, owner of the newly opened JB’s Street Meat.

JB’s Street Meat, which opened just a few short weeks ago in the Queen and Kennedy area in Brampton, invites diners to enjoy casual but well-crafted meat and BBQ dishes indoors.

“I have a very open kitchen concept, it’s right in front of you when you enter. You can watch us make BBQ sauce and fresh gravy. We roast and smoke the chicken in front of everyone, we’re doing all those things every single day.”

An industry veteran of close to 30 years (he started working in restaurants as a dishwasher in his early teens and was once the general manager at old school Mississauga hotspot On the Curve), the seasoned restaurant aficionado knows a thing or two about running a successful dining operation and understands that a fresh and ever-changing menu will get people through the door.

That said, this restaurant marks Boone’s first foray into ownership–and it’s one he’s incredibly excited about.

“This has been my dream for years and years and years. The idea of what I wanted to do–bring freshness back into restaurant–my friends and family [and the community] really love it. It’s also a real meeting place.”

“We serve chicken fingers and fish and chips and make our batter in-house from scratch,” he says.

While the restaurant is more of a takeout and delivery joint (it offers a small number of seats for people who want to eat their meal on the spot), Boone is careful to emphasize that the food is anything but the generic, pre-frozen cuisine diners might expect at other quick and full-service establishments.

“Bringing fresh food back into the industry, that’s my main thing. I’ve worked at different companies and corporate places, and not everyone is making actual fresh food,” he says. “It comes off the truck frozen and has to be defrosted. We’ve lost real home cooking and authentic BBQ. I’m going to local butcher shops. I spend two to three hours every day buying products for the restaurant.”

“You can get fresh food here all the time. We serve all natural hot dogs with no fillers. Everyday, my chef will create something new. We’ll come up with something based on the fresh meat or vegetables we bought.”

While Boone and his team like to change up the menu based on the day’s shopping, they do offer some staples that diners can expect to see on the menu daily.

“We have a core menu and it contains pulled pork and pulled chicken, mac and cheese, ribs and more. That’s our core. We venture outside our core menu on a daily basis. So if someone wants a unique grilled cheese, we can do that. We make burgers fresh every day, so we do variations. We’ve had a peanut butter and chocolate burger and a cajun burger with jalapenos. The creations never stop.”

According to Boone, customers need not fear hefty price tags at his resto.

“ Our price points are low,” he says. “We’re in a working class neighbourhood, so you can come in and get a pulled chicken sandwich and a pound of fries for $9. A classic poutine is $6 and a pound of smoked chicken wings is $10. We’re very affordable.”

As why Boone decided on Brampton as the site of his first restaurant, he said that, despite working all over the GTA, it felt good to set up shop at home.

“I’m a homegrown boy. I’ve worked in Richmond Hill, Toronto, Etobicoke and Scarborough, but I went to Notre Dame high school. Me and the chef want to give back to our community. Locals come and hang out and socialize. We have guys who come in every day just to say hi. We’re a local community spot.”

Although the resto hasn’t been open for very long, the first few weeks have been busy–perhaps because Boone and his chef (who he says only goes by “Chef”) started preparing people early by serving BBQ in front of the storefront while the restaurant was being renovated.

“While renos were going on, Chef and I purchased a large BBQ and we cooked outside in front of the restaurant at street level. We did that for almost the entire summer and we handed out menus. We gave people a small sample of what we were doing. We did a soft opening with friends and family, it helps to be across the street from a high school.”

As for what the future holds, Boone says he’s always looking to grow.

“We’re looking to expand,” he says. “We have another spot picked out in Oakville. We want to grow, but we’ll always keep with the theme of everything being fresh. I think we have a really great product. There aren’t a lot of places that do what we do.”

Fun fact: This Saturday, Boone will appear on Let’s Eat with Zane Caplansky.