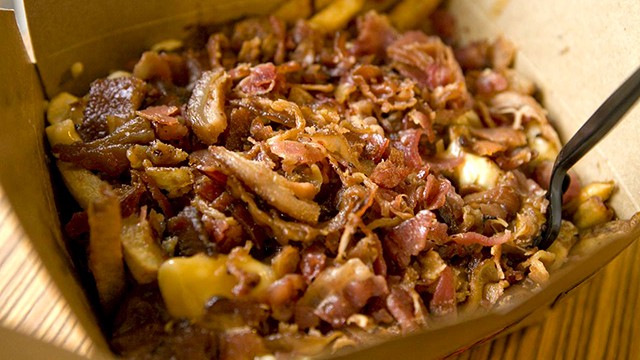 Good news, gluttonous students! One of the most prominent purveyors of decadent comfort food has opened up on your local college campus!

The news is likely to please students, as Mississauga has shown great enthusiasm for Smoke’s in the past. The brand’s Port Credit location opened to great fanfare (and huge crowds excited by the free food offerings) back in early 2015. Before the Lakeshore store opened, Smoke’s CEO Ryan Smolkin appeared on insauga.com TV to promote the popular resto chain. He also told insauga that residents could expect to see a Smoke’s in City Centre and it looks like he’s made good on that promise (and, interestingly enough, this won’t be City Centre’s only location).

“It’s global domination,” said Ryan Smolkin, Smoke’s CEO. “We’ve been saying that since the beginning. It’s killer. The growth is killer. Port Credit is doing awesome with [the late night crowd] and families and the walking traffic. Now, we finally have the perfect location on Confederation Parkway and we’ll start construction on that in a month or so.”

Now, Sheridan students with a hankering for a pierogi poutine will no longer be denied the privilege of dining on a delicious (and uniquely Canadian) delicacy in the halls of their learning institution. But while summer school students are free to grab some poutine between classes, Smolkin says the real new opening celebrations will begin when the college welcomes more students back in September.

“As we get closer to the school year, there may be events,” he says. Maybe an eating challenge.”

In terms of the menu, the Sheridan location will offer diners all the brand’s signature dishes and perhaps a special or two.

“We’ll put the idea [for specials] to the students,” Smolkin says. “Maybe there will be a Mississauga special, or maybe more than one. We want to find out what the kids want and maybe we’ll do a contest.”

As for student response, Smolkin says people are pretty pumped about the decadent poutine purveyor.

“There’s nothing but excitement,” he says. “We can’t even walk the campus in our t-shirts. They mob our car. We’re going to have a lot of fun there.”

As for the upcoming standalone location on Confederation, details on that are still incoming. That said, Smolkin says that Mississauga loves Smokes and that, more importantly, Smokes loves Mississauga.

“The density of the residential areas is great. It’s a city on its own and it’s unique and we haven’t fully tapped it. The [upcoming location] on Confederation will be killer.”