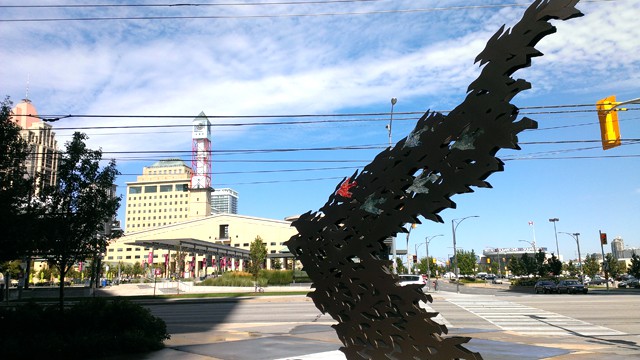 A new public art piece entitled ‘Migration’ by local sculptor Alex Anagnostou was installed at the intersection of Duke of York Boulevard and Burnhamthorpe Road. The two part sculpture, composed of aluminium, stainless steel and sandcast molten glass, forms an arrow-like gateway over the boulevard. 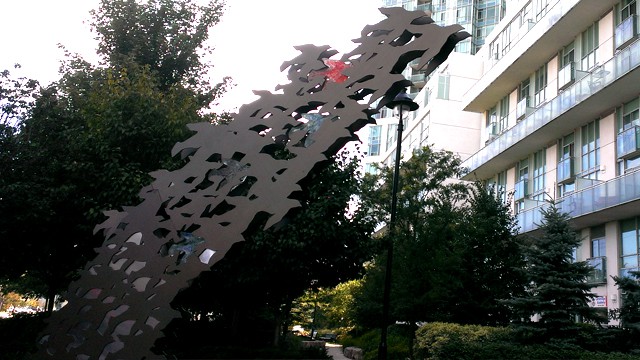 “Mississauga’s downtown core is already home to artist-designed crosswalk markings at City Centre Dr. and an iconic piece entitled ‘Possibilities’ at the roundabout located at Duke of York Boulevard and Square One Drive,” said Susan Burt, director, Culture Division. “‘Migration’ by celebrated artist Alex Anagnostou has joined the growing outdoor public art gallery in the area. The sculptures were realized in part through developer contributions from two condo developments flanking the artwork.”

According to Anagnostou, ‘Migration’ recalls the story of the passenger pigeons that used to number in the billions as they flew across the southern coast of Lake Ontario during their migrations and would roost on the southern edge of Mississauga. The artwork also references the Mississauga First Nations people who were drawn to the area because of the rich and vibrant landscape which included the passenger pigeons.

“Now we have a very diverse and dynamic multicultural community as new Canadians call Mississauga home,” said Anagnostou. “In this way, the art also serves as a metaphor for the constantly changing environmental and cultural landscape of this vibrant city as we try to balance environmental concerns with dynamic growth.”

The sculptures are constructed of laser cut aluminium and stainless steel and are inset with several three inch thick sandcast birds formed with molten glass, all common architectural materials. Local fabricators were used in the making of the frame and façade. The southeast structure forms an archway as the birds are taking flight whereas the southwestern part of the sculpture forms the migratory V formation. The space between the two sculptures represents the loss of the bird population which were so numerous that they darkened the skies like a solar eclipse. The topographical imagery on each bird causes us to re-think the space that we occupy.

“The goal of the public art program is to make Mississauga a place where people choose to be and ‘Migration’ is certainly an example of art that helps make our city a culturally interesting environment,” said Burt. “This piece in particular speaks to the multicultural element that defines our city and makes Mississauga so unique.”

“I have had the opportunity to grow and develop as an artist at the Living Arts Centre in Mississauga and appreciate the opportunity to contribute to the local cityscape with this important public art commission,” said Anagnostou. “I hope that this work will speak to the people about the history of Mississauga as we contemplate the future and as a possible gateway to the City.”

Alex Anagnostou is an artist in residence at the Living Arts Centre glass studio where she sculpts cast and blown glass. She holds two fine art-related degrees from the University of Toronto 1988 (B.A. Fine Arts Management) and the University of Western Ontario 1994 (B.Ed. Visual Arts) and graduated with a silver medal from the School of Crafts and Design Glass Program at Sheridan College in Oakville. She has received two Ontario Arts Council project grants and numerous awards and accolades. She is fascinated by science, human nature and how we interact within our social and physical environment. Much of her work is inspired by how glass has expanded our ability to see on a microscopic and macroscopic level and how it has allows us to see our environment with a critical eye. Her sculptures explore issues of time, space, nature, energy and interconnectedness. More recently, she has partnered with Peter Renolds of Zoom Technologies Inc to complete larger scale public art sculptures. Alex has received two Ontario Arts Council grants, residencies and several awards. She has exhibited internationally at the Victoria and Albert Museum in London, the Cheonjiu Craft Biennale in Korea and the Vancouver Museum during the Olympics. Her work is part of two Canadian Federal Collections, the Saudi Arabia Ministry of Culture Permanent Collection and the Living Arts Centre among others. To learn more about the artist visit: www.alexanagnostou.com.

About the City of Mississauga’s Public Art Program

To learn more about the public art program and to see images of ‘Migration’, visit www.mississauga.ca/publicart.