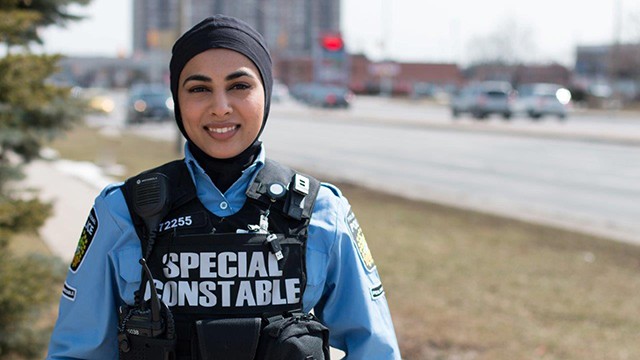 Now, a young woman who recently joined Peel Regional Police as a special constable, prisoner escort officer (PEO) is working–simply by being present–to change that.

Yusra Syed, a former University of Toronto Mississauga (UTM) student who became fascinated with policing during her post-secondary years, beat out a wealth of competitors to become a PEO with one of the country’s largest police forces (the Brampton courthouse she works in is one of the largest based on the sheer number of prisoners it moves). Although Syed has only been in her current position for about three months, she’s worked in security positions at the Toronto Immigration Holding Centre and Garda Security that have helped prepare her for the world of the law enforcement.

As for what else sets her apart, she’s the first officer in her position to wear a hijab on duty and her presence is, she hopes, inspiring other women to expand their horizons and pursue dreams they might not be expected to have.

The interview has been edited for length and clarity

So, what do you do with Peel police?

I’m a prisoner escort officer. I work at Davis Court in Brampton and I escort prisoners to and from prison to the courthouse and from holding facility to the courtroom.”

When did you decide you wanted to be a police officer?

I knew by the end of first year university that I wanted a career in law enforcement, so about 2012. I went to UTM and did a double-major in psychology and criminology. I wanted to get involved then.”

Why did you decide to become a PEO?

The opportunity presented itself to be a PEO, it was a great place to start and learn more about the field.

How was the job been so far?

Do you think your presence is having a positive impact on the community?

I would hope I would have a positive impact. I think it’s a good thing to have the Peel community represented. If you see someone who looks similar to you, it might encourage you to follow your dreams. Around the time that I decided that this is route I wanted to take, I saw an article about a woman who wore a headscarf in another police force and it motivated me.

Have you gotten a lot of support?

I’ve gotten a lot of positive feedback, I get stopped in the hall. Everyone is very encouraging and supportive.

Have you ever felt intimidated?

I wasn’t too intimidated at first, I knew what to expect taking a job like this. Of course a new job can be a challenge, but no, I’m not intimidated.

How did your family and friends react when you told them you wanted to be a police officer?

Family and friends were excited and my parents are my biggest supporters. Any parents of course would be a little concerned that their daughter wanted to go in this field, but they were always supportive from the start. They always encouraged me to do what made me happy. They were very proud when I gave them the good news [that I was hired].

How did your work in security prepare you for your current position?

I’d say the environment is different, but I’m fortunate I worked in that field because it gave me good skills that I can carry into this job. My last job was with alarm response and we had to respond and be aware of how quick to respond. [I learned about] working with the public, working with the police. Now I’m able to bring those skills here.

How do you feel about the other officers you work with?

It’s an important job that has to be done. I have to help other officers and we have to work together to make sure that we can get everything done smoothly and transition from morning to evening. I can be part of this team and do my part. We all understand each other, we come from similar backgrounds. We understand this job and community, and it’s nice to learn the job and the community.

How do you enjoy working in Peel?

It’s very busy in Peel, but Peel has a great community. It’s nice to be working in this region.

What plans do you have for the future?

Right now, I’m excited about the position I’m in. I’m going to focus on doing this job well.
I’m very happy to be working here and spend my time here. I think, if anyone else wants to join this field, they should. They shouldn’t let anything hold them back.