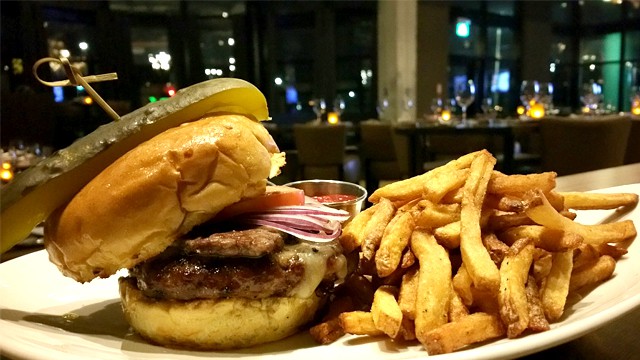 Stir Kitchen & Beverage Co. is a new restaurant located in a plaza along Hurontario St. just north of highway 403.

The spacious and open concept venue has exposed ceilings adorned with a myriad of chandeliers and ceiling art and is enveloped in warm colours making the space inviting. The large floor to ceiling windows of this corner unit allows a flood of natural sunlight into the space for the daytime crowd and in the evenings, the space is transformed with soft lighting and various wall mount fireplaces.

The restaurant features a large bar with large television screens (but not in an invasive kind of way), cozy booths, both low tables and high top tables, and a large private dining area which can seat up to seventy people.

Brian Meikle is a seasoned restaurateur with twenty restaurants under his belt since 1984. Stir is his seventh culinary venture in partnership with Faz Rajani, Ryan Elliot and Andrea Masny.

What was in the space before you took it over? Crocodile Rock You will also find a variety of salads, stone oven pizzas, and mains such as the Stir burger (a decadent burger made with an 8 oz patty topped with a truffle and mushroom duxelle, a grilled steak tip, and demi-glace on a grilled brioche bun as seen in the cover shot). What’s Up and Coming? Live music Friday and Saturdays, website, daily features and occasional menus (i.e. lobster and game meats). A projector screen which can be used for major sporting events or corporate functions and the large wrap around patio.

Patio: Yes and it’s huge! The wrap around patio can seat 140.