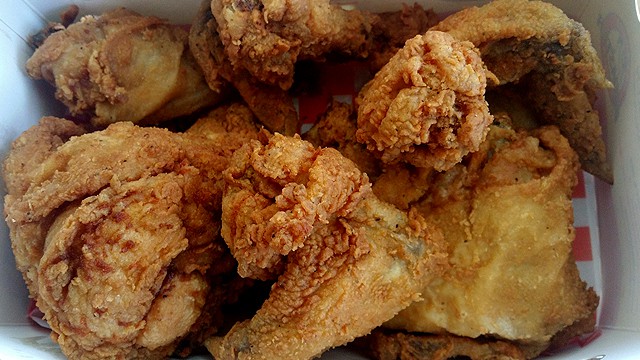 Another fast food option for fried chicken recently opened up in the 5 and 10 neighbourhood called Sheriff Broaster Chicken. Who is Sheriff Broaster? I don’t know but the Canadian company uses a technique called broasting to cook their Halal fried chicken. It’s “fresh, tender & juicy – hands down the best chicken” as claimed in their business tagline.

Broaster® is an American company that developed specific equipment to prepare food using a method called pressure frying. The method is a tricky combination of pressure cooking and frying which produces food that has less fat and oil compared to traditional frying. Many fast food joints have adopted this method of cooking such as the king of Kentucky (KFC).

Sheriff Broaster’s chicken is marinated for at least 12 hours before broasting. You will find a lot of chicken on the menu such as fried chicken, chicken nuggets, chicken wings, chicken burgers, chicken fajitas and chicken tenders.