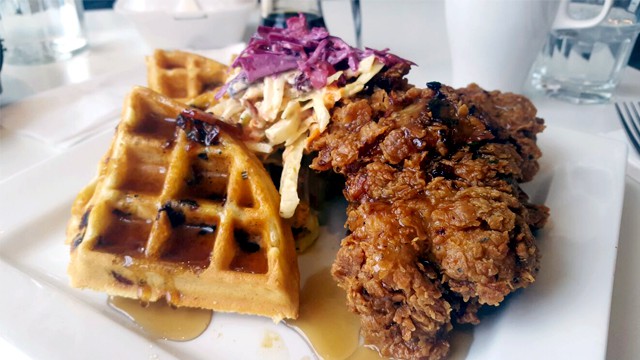 Lissa and Damian are a husband and wife team who are self-proclaimed foodies and steadfast local supporters who love their community in Clarkson – an undiscovered area of the city which has a number of gems including theirs – a new brunch spot called Kravingz.

Both Lissa and Damian frequently asked one another “what are you craving” whenever they were heading out to grab a bite to eat, hence the name of their new restaurant which serves a variety of highly unique breakfast dishes, burgers and sandwiches which can be eaten at any time of day (technically until the resto closes).

“We created a multicultural-fusion menu which caters to multiculturalism in Mississauga and Canada [we offer] something different than just bacon and eggs”, states Lissa.

Lissa is of Filipino descent and Damian Polish and while you can order the usual (bacon, eggs, home fries and toast) their menu pays tribute to the ethnic diversity you’ll find in Mississauga expressed in a palatable form which include Filipino, Polish, Jamaican, Latin, Mexican, Canadian and American influenced plates.

The restaurant is a first for both Damian and Lissa having dabbled in the front of house side of the industry. Their dream was to open up a place of their own in their neighbourhood which was missing a brunch spot. Damian is a contractor by trade and transformed the space which seats thirty-six which features French-bistro doors, crown moulding, dim lighting in a cool colour scheme of white, grey and turquoise blue.

Unique for: Made-from-scratch menu which supports local suppliers. They source a number of the ingredients for their dishes from local bakeries and suppliers such as Manila Bakery’s specialty – a Filipino bread roll known as pandesal, produce from A.J. Lanzarotta, and other ingredients from Truscott Bakery and Sheridan Meats.

Signature Dish: The Flip Side (house made longanisa which is a Filipino sausage served with crunchy garlic rice and a fried egg), The Polski Benedict (potato placki is a Polish potato pancake served with smoked salmon or peameal bacon, poached eggs and house made hollandaise), Chicken N’ Waffles (crispy fried chicken served with bacon and jalapeño waffles, bacon dressing and coleslaw)and The Islander (jerk corned beef hash, corn and cheddar grits and poached eggs) are so far the most popular. 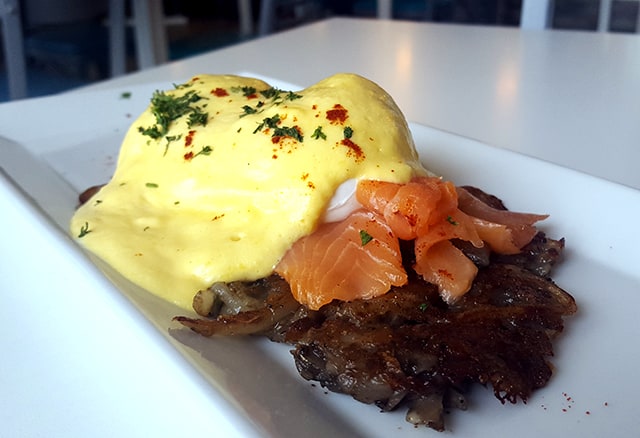 Grand opening Date: The restaurant is open for business and the grand opening will be sometime next spring.

What’s Up and Coming? Dish suggestions from diners and possibly turning the suggestions into feature dishes. Fish tacos with roti instead of tortilla, using produce from local farmers markets in summertime. Freshly squeezed orange juice, smoothies, coffee based bevy’s including lattes, americanos and espresso.

Patio and Seats: Possibly in summer 2016