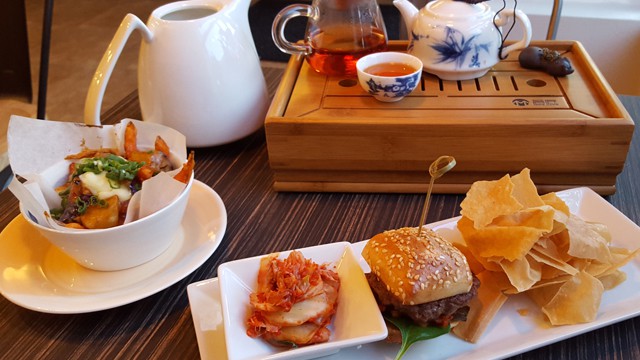 Flip A Coin restaurant recently opened in Port Credit and took over the space formerly known as Sassy Teas on the south side of Lakeshore Rd. W just east of Mississauga Rd.

The restaurant concept specializes in tapas and while tapas is not a unique concept in Mississauga, Flip A Coin’s concept is and focuses on Asian inspired tapas.

The idea was born during a trip to Whistler, BC where proprietors Lorita Ruan and chef Sage Wei had spent their vacation and discovered small plate dining perfect for their small appetites and sharing.

“Because I have a small appetite, I like the idea of sharing, it’s more interesting to try different foods and it encourages conversation”, says chef Sage.

The young entrepreneurs are recent MBA graduates from McMaster University with enormous passion for their restaurant where the kitchen spends a lot of time experimenting with new ingredients and developing new dishes – diners can expect to frequently try something new.

I sat with both chef Sage and Lorita discussing their vision and what makes them unique and first and foremost, it’s the menu which isn’t very large but one that is diverse. Chef Sage trained at Liaison College and spent time working in China to learn traditional Chinese cooking techniques which she has incorporated into her menu.

The lounge-like space is an ideal spot to catch up with some friends and try something new. The menu blends Eastern and Western ingredients and concepts and incorporates traditional Asian spices such as Chinese hawthorn berry, star anise, Chinese black bean and Sichuan peppercorn (also known as Chinese coriander) which you can find on their wall of spices.

The duo (basically) dared me to try a dried Sichuan peppercorn (also known as Szechwan) to feel the effects of the numbing sensation known as paresthesia. Sure, I’ll try anything at least once (for the most part), it didn’t seem like a big deal.

I think most people assume that the Sichuan ingredient makes Sichuan dishes spicy but chef Sage explained that it’s the combination of the Sichuan peppercorn with hot peppers of a dish that creates a spicy heat plus the numbing sensation in your mouth. The Sichuan itself isn’t spicy.

I had what I thought was a tiny piece of the Sichuan peppercorn but probably should have had a pin sized portion of it. Chewing the Sichuan released all of the oils and aromas and created an absolutely unusual sensation which I couldn’t comprehend because it happened so quickly. From what I can recall, it started as a mild peppercorn taste which developed into a cooling, burning, and numbing sensation that made my mouth incessantly water that I was drooling out of the sides of it. The glass of water I drank intensified the sensation.

I needed a few minutes to gather myself and once I regained control of my salivary glands, thoughts flooded my mind of ways I can use the dried spice to punk people.

It will be interesting to watch the menu and both Lorita and chef Sage evolve in their process of growing their restaurant. I look forward to seeing the new menu creations and how Flip A Coin unfolds.

Are they from Mississauga? Both Lorita and chef Sage recently moved to the city from Hamilton.

Why did you choose Mississauga? “Mississauga has a lot of young professionals and we love Port Credit…the location gets a lot of walking traffic and the area has a lot of summertime festivals”, says Lorita.

Signature Dish: The mini-flip is Flip’s signature beef slider using homemade patties with a secret ingredient (you can try to guess what it is for $1 off your meal), topped with kimchi and combined with house made teriyaki sauce served with house made crisp chips.

“The Kong Fu tea is popular in southern China”, says Lorita. Also referred to as Gongfu tea ceremony or kung fu tea ceremony, the Chinese tea ritual involves a methodical process of preparing and presenting the tea. Lorita took the time to explain and demonstrate the process to me. The Ming Jiang tray, made of bamboo, is used to hold the items required for the ritual and also serves the purpose of a drip tray. The equipment includes a porcelain tea pot, brewing vessel, strainer, teapot, tea cup and a “tea pet” (mine was a frog). There are about six steps involved in the intriguing tea ritual forced me to slow down and appreciate the aroma, taste and process of tea making. The first pour is called a “wash” to wash the tea leaves and this is poured over the “tea pet” and into the drip tray. “The tea pet is something fun to play with”, explains Lorita. The pets are traditionally classic Chinese figurines and helps contour the pour of the hot tea into the tray and prevents the hot tea from splattering against the tray.

Food Menu: The seasonal menu is MSG free and chef Sage creates house made sauces and accompaniments including black bean, chilli oil, avocado and spicy mayo, teriyaki, garlic chilli, soy bean crumbs and curry paste. There are currently 14 dishes dishes on the menu which include steamed black cod and bowl of joy. Both are prepared using the traditional Chinese method of steaming on a bamboo steamer. This technique keeps the food moist and infuses the flavour and aroma of the bamboo. “Our food is elegant, tapas style not traditional Chinese cuisine”, says chef Sage.

It’s important for both Lorita and chef Sage to continuously evolve their menu to include new dishes. They encourage their diners to provide feedback and also be part of the process where they offer samples of dishes they are experimenting with before it takes a spot on the menu. For example, they are working on a sweet potato poutine which is made with pulled pork that has been marinated in a house made sauce, house made Asian style gravy (which has a slight kick to it), green onions and cheese. They are also working on a black rice vanilla ice cream donut sandwich which had a creamy texture from the glutinous black rice. The next dessert idea is a crème brulee infused with star anise.

Drink Menu: The menu includes mocktails and signature teas. The liquor license is on its way. 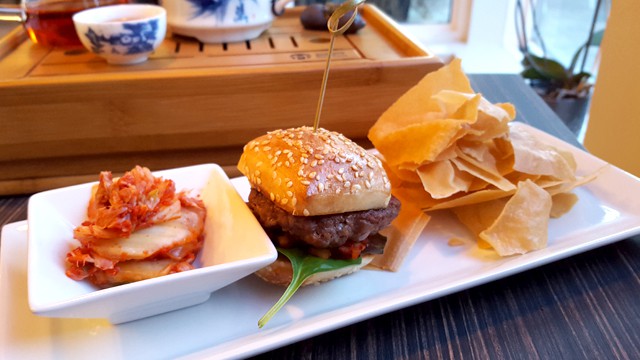 What’s Up and Coming? New menus. Grand opening and a record player – diners will be encouraged to bring their own vinyl to share their music.