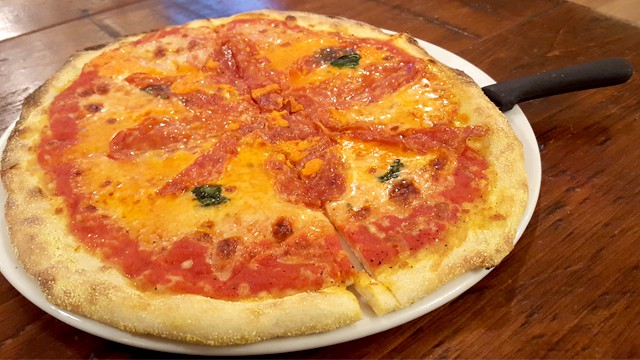 Pizzeria Dei Sassi is a new fast-casual restaurant that serves authentic Italian cuisine. It specializes in food from the village and pizzas from one of the oldest places in the world — Sassi di Matera in Italy. It’s an enchanting place that is considered a historical center and was selected as a UNESCO World Heritage Site in 1993.

Personal sized 11” thin crust pizzas are only one portion of the menu offered at Dei Sassi’s. You will also find panini’s, calzones, made to order pasta (fresh pasta sourced locally from Mississauga Noodle), soups, salads and desserts (sourced locally from Irene’s Celebrity Cakes). The pizzas are cooked in a stone oven (imported from Italy) for about two to three minutes and are made with homemade dough and fresh ingredients. Some come with homemade pesto — such Chef Di Cecca’s signature red pepper pesto, which is on the Diavola pizza (pictured above) in addition to San Marzano tomato sauce, mozzarella, spicy salami, and basil.

Pizzeria Dei Sassi is a gorgeous space is filled with natural wood, reclaimed church pews, a large communal table (and smaller ones), wrought iron accents, chalkboard menus and an open pizza kitchen. It’s located along a busy stretch of Dixie Rd. in a facility that’s shared with his 12-year-old catering business On The Move.

Chef Lino Di Cecca’s chaotic culinary past started when he was kicked out of Humber College’s culinary program over a decade ago with only a semester left to complete. Rather than moving into another industry all together, the challenge prompted him to earn his culinary street cred by starting a hugely successful group of cafes with a business partner called Lettieri’s. When that chapter ended, he packed up, moved to Vermont, and opened a fine dining restaurant called La Pista.

He’s toiled in kitchens for over 15,000 hours and has worked from the ground up to running what was coined one of the top five gems in Vermont. He also has Lettieri’s under his belt and provides catering for a myriad clients, including well known musicians at major musical events such as Bestival, actors, airlines, politicians and intimate private parties. He’s also been on The Food Network’s I Do…Let’s Eat as a guest chef.

Why Mississauga? Part of On The Move Catering (the store front) was vacant so he decided to use the space for the pizzeria he’s always wanted.

Grand opening Date: The restaurant is open for business and the grand opening date will be announced in the new year.

What’s Up and Coming? Grand opening early in the New Year. Events will be announced. Hot entrees, porchetta and cocktails will be added to the menu.

Patio and Seats: no