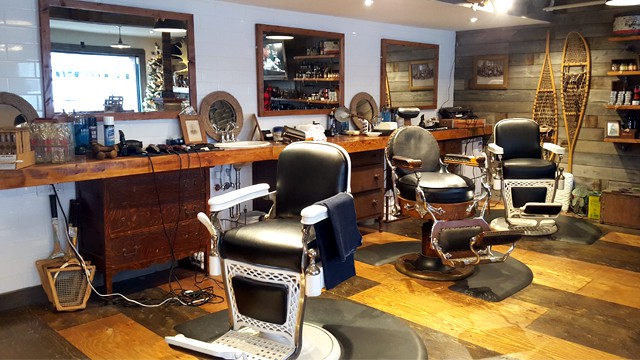 CABIN is a new shop for men which offer old school, full service, barber services, unique manly grooming products and accessories, and houses an in-store humidor. And let’s be clear here, it’s not just a barbershop – it’s an experience.

For newbie’s to CABIN it will feel like discovering a shop in Leslieville (Toronto) filled with unique treasures where you could easily find yourself perusing for hours, like an art aficionado at the opening of an art exhibit. You can also relax with a complimentary Balzac’s espresso while waiting to get a hot towel shave, beard trimming or hair cut or catch up on emails using their free Wi-Fi.

CABIN is the equivalent of a woman’s hair salon, spa and gift shop molded into one, but way cooler. It’s a space for men to retreat but women are also welcome to check the space out. They host men only special events such as a cigar night with a strict no women allowed rule for the men only events. If there’s ever a time to have penis envy, it’s now. CABIN has also hosted a ladies night but devoid of the lesson in cigars (not the same).

The eye-catching appeal of CABIN on the exterior includes an old Friendly Corner Barber Shop – We Still Shave Around The Ears sign, cottage chairs, an outdoor fire pit and a sign that welcomes Gentlemen Tastemakers And Those Who Love Them. It’s a gentlemen’s club so to speak, exclusive in the pampering for men, men only events and future plans for a members only cigar club, but aside from this, women can also peruse, shop and hang.

CABIN may be a concept ahead of the game in Mississauga yet so fitting in the most eastern part of Port Credit (which is locally referred to as East Village).

My first interaction with someone at CABIN even before entering the shop was with Nico whom I met walking into the shop for the first time axing fire wood just outside the front door – it’s wood for the fireplace I was told.

The close attention to details inside the rustic small space is climactic starting with the symphony of woodsy meets musky aura which envelopes you as you walk in and brings you to another level of relaxation and intrigue. 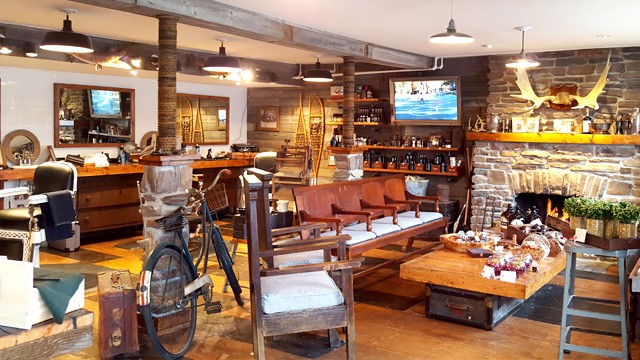 You’ll find a collection vintage decor pieces including the barber chairs, an old bicycle and a lot of wood. There is a stone fireplace, taxidermy art such as mounted fish, a deer head, moose antlers, ancient snow shoes, a dart board, cigar humidor and a vast selection of men’s high quality grooming essentials and forever products such as hand crafted leather accessories.

Louie Manzo, founder and sole proprietor of CABIN, is a Saugaboy – born and raised in Port Credit. Twenty years and still counting in the world of brand strategy for major Canadian labels as a co-owner of an advertising agency, he says CABIN was “an idea which kept growing and kept coming to life”.

While men were going to women’s salons, Manzo wanted to create “a social aspect around grooming and accessories that guys would like…private clubs exist but nothing at a pedestrian level”, explains Manzo.

“CABIN is a flashback for a lot of people, it’s the stuff they saw as a kid and it’s nostalgic and comfy for the older guys and the younger guys find it charming”, says Manzo.

Why Mississauga? Manzo wanted to bring something cool to the east side of Port Credit (East Village) “it’s a unique environment”.

Unique for: Manzo refers to the product lines he carries as ‘small batch curated’ “the product has to have a great story such as LSTN brand of headphones where the company donates [a portion of the sale] for hearing aids for under privileged children”, states Manzo. Most products in the store are Canadian brands with the exception of a few only because there wasn’t an equivalent in a Canadian brand of the same quality. Royal North Company (RNC) is one of a few a staple brands at CABIN which features Canadian made products and accessories such as hand blown whiskey tumblers (made in Ontario) or a luxurious Merino Wool throw hand woven by a group of granny’s in New Brunswick. You will also find various Canadian brands of men’s grooming products on CABIN’s ‘wall of grooming essentials’ and even men’s jewelry from a Toronto designer and brand called Vitaly. You will also find bowties, socks, underwear, hats, winter accessories and more.

What’s Up and Coming? Evolving product mix. Members cigar club. More social themed mixer events for men and women. Possible expansion into the unit next door for a ‘mantique’ store which will be an extension of products and apparel for men.