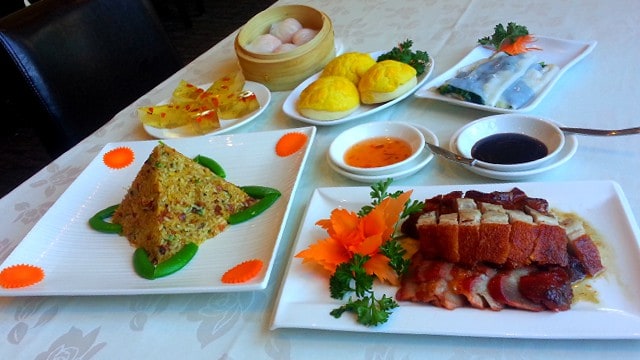 Owners Danny and Eric Tang and Executive Chef Jimmy Zhou spent just under a year drafting the plans for their first run at the tumultuous restaurant industry – a calculated risk supported by “a good team which make up good people,” according to Danny.

A Mississauga resident and local businessman, Danny likes to refer to their restaurant as an establishment where “east meets west” – a place that caters to the multicultural city that Mississauga has become. Mississauga is also Eric’s home city and he, too, has witnessed an increase in the variety of ethnicities over the past 10 years and welcomes the change in the city’s landscape.

The expansive restaurant boasts an open concept design with high ceilings and natural sunlight that brightens the space during the dim sum lunch rush. There is a fireplace near the front windows and a private VIP room that seats 30 people. The restaurant is also designed to accommodate corporate conferences and can seat 60 people in the back portion of the facility. The area is equipped with a projector and screen and can also be partitioned off for privacy.

Menu: Don’t let the “fine-dining” label scare you because the menu offers a variety of options and price points, including their lunch special for just $13.95. That special includes your choice of a vegetable spring roll, wonton soup or hot and sour soup, chicken fried rice and nine entree options including the BBQ pork and duck combo, General Tao chicken and more.

Executive Chef Zhou creates extremely flavourful and beautifully plated dishes. His menu also caters to vegetarians who can choose from over 20 different options. You will also find hot pot, fried rice, noodles and a variety of chicken, duck, pork and beef dishes on the menu.

The restaurant has a fresh water tank that is home to the seafood you will find on the menu and a BBQ display case that features all the cuts of meat that are barbequed in house.

Why Mississauga? It’s one of the properties that Danny Tang owns. In fact, he owns the entire building, and the opportunity and timing were just right.

What’s Up and Coming?: The patio will be ready in the summer and will seat 50+.

Seats: 360+ seats inside, 30 in private VIP section and 60 can be accommodated for corporate functions.