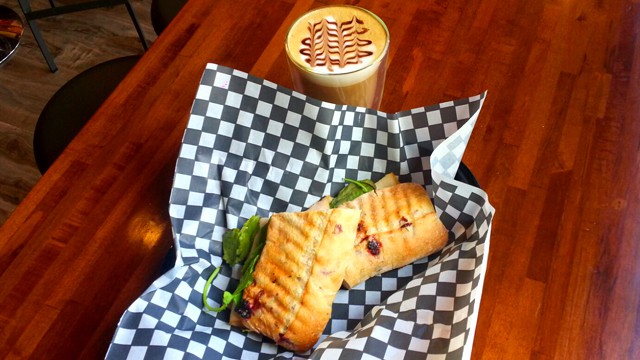 Independent coffee shops are rare among the big corporate chains in Mississauga and when one opens up; we can’t help but rejoice for ‘team indie.’

(Signature Drink and Sandwich: Nutella Cappuccino and Turkey Brie Greens Sandwich with red a pepper aioli on a cranberry baguette as seen above.)

Archtop Café caters to coffee, food and music lovers and is the first of its kind in Mississauga. Kim Prussky and her husband Ron specifically chose Port Credit over the Toronto neighbourhoods of Riverside and Roncesvalles because of its vibrancy and strong music loving community.

Ron had been in the music business for over thirty years, specializing in the manufacturing and distribution of guitars — hence the name Archtop Café (archtop is style of guitar). Kim enjoys good, simple food and coffee. The café has allowed them to create a space where they can combine their passions. 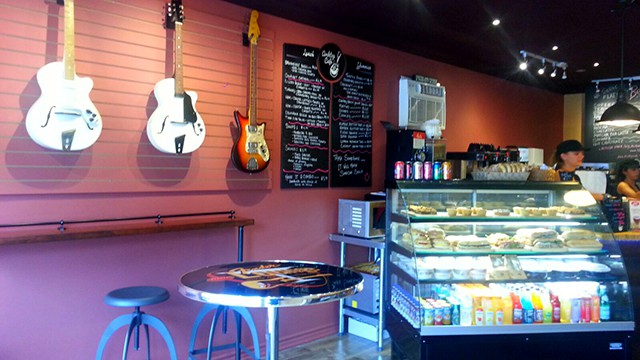 The cafe is cozy and full of character, boasting a wall with four Egmond vintage guitars.

“The guitars are from Holland and it is the brand of choice most UK guitar players start with, including the likes of George Harrison, John Lennon and Paul McCartney,” Kim says. The opposite wall features a collection of new vinyl, CDs and DVDs for sale. You’ll find everything from Jimi Hendrix to Bruno Mars. “We wanted to cater to all ages of music lovers,” she says. 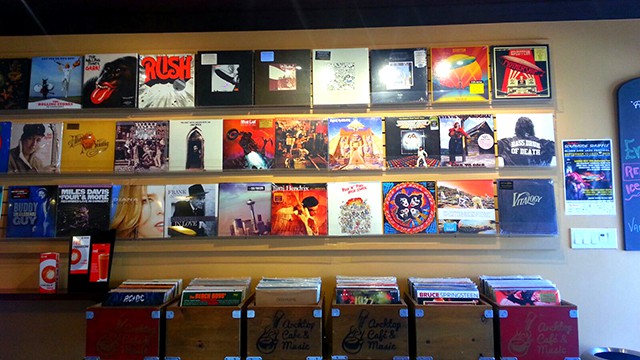 Grand opening Date:
The cafe has opened its doors and will be hosting a grand opening event within the next month or so.

What was in the space before you took it over?
Leatheropia (boutique leather accessories store).

Concept: “Our tag line is ‘food, brew and songs’ and we created a space that has a warm vibe – a place that has a community feel conducive to engaging conversations and vinyl is a great conversation piece,” says Kim.

Drink Menu: The drink menu includes their signature blends of fair-trade coffees originating from Central America, Tanzania, Peru, Brazil, Mexico, Honduras and Bolivia that are specially roasted for Archetop every week. You will also find espresso-based drinks, including one of their signature drinks called Nutella Cappuccino. You’ll also find specialty hot drinks (chai latte, Irish jig, London fog, red velvet latte and others), 24 varieties of fair-trade loose leaf teas, milkshakes and a dessert espresso drink called Espresso Ice Cream that includes a shot of espresso and is topped with real soft-serve ice cream (made with real cream and no artificial ingredients, as seen in photo below). You can choose from a variety of milks at no extra charge, including two percent, lactose-free, soy, almond and coconut.

Food Menu: All of the sandwiches are made fresh daily in-house using all-natural ingredients, and the pastries are made fresh and delivered daily. You can also find breakfast bagels, soups and salads.

What’s Up and Coming? Kim and Ron are working on their nook in the basement, which will feature a large selection of used vinyl, CDs and DVDs (including music and collectible movie and TV series sets such as Cheers and the Batman TV series from 1960s). Live music and wifi are also coming.

Seats: Six inside and six outside.