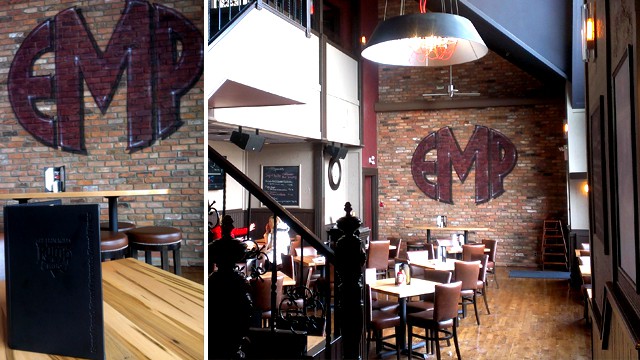 The Erin Mills Pump (EMP) is the latest addition to proprietor – Scott Smith’s restaurants which include The Clarkson Pump & Patio, Pump House Grille, and Papa Giuseppe’s Pizza & Pints. These restaurants have a great following and the Erin Mills Pump was built to invite new ones, which is located within walking distance to quite a few residential areas.

The EMP space is unique in itself, it has two levels which include a dining area, a bar and an upper level lounge area. The space was formerly housed by the Rosewood Bistro and Wine Bar, but not anymore (out with the old, in with the new – so long Rosewood).

Executive Chef Joe Mascia oversees the recipe development at all of the restaurant locations and he had developed the EMP menu to include a number of dishes from the other successful restaurants which serve up hefty portions that are full of flavour. This menu will include pastas and pizzas which are freshly baked in a stone oven, the same oven which can be found at Papa Giuseppe’s.

Wing nights are not once but twice a week and EMP will be serving up their infamous giant wings (which also come baked) on Mondays and Tuesdays. The special menu features are a work in progress at this time, and you can hear about menu offerings on their Facebook page.

Erin Mills Pump has North America’s first and only Heineken Beer Subzero Tower, which means that you can enjoy a subzero Heineken poured out of the tap, which is actually covered in ice, while watching a game on their 160″ screen.

The Heineken Beer Subzero Tower keeps the beer between -2° C to 0° C, the perfect temperature, just before the freezing point of beer. Heaven on earth will be drinking the subzero  beer on a hot summer day paired with some of their signature wings and a game on their 160″ screen.

Come summertime, the patio without a doubt will be busy – imagine an outdoor bar, lounge seating, and a fire pit. It may just make insauga’s top patio list, we’ll have to see.

If beer isn’t your thing, EMP also has a Wine Preservation System (which keeps wine that has been opened fresh for up to 30 days), which allows winos and connoisseurs alike the freedom to purchase fine wine and reserves which are normally sold by the bottle, by the glass.

Look out for their official grand opening which is scheduled sometime before the end of the month.