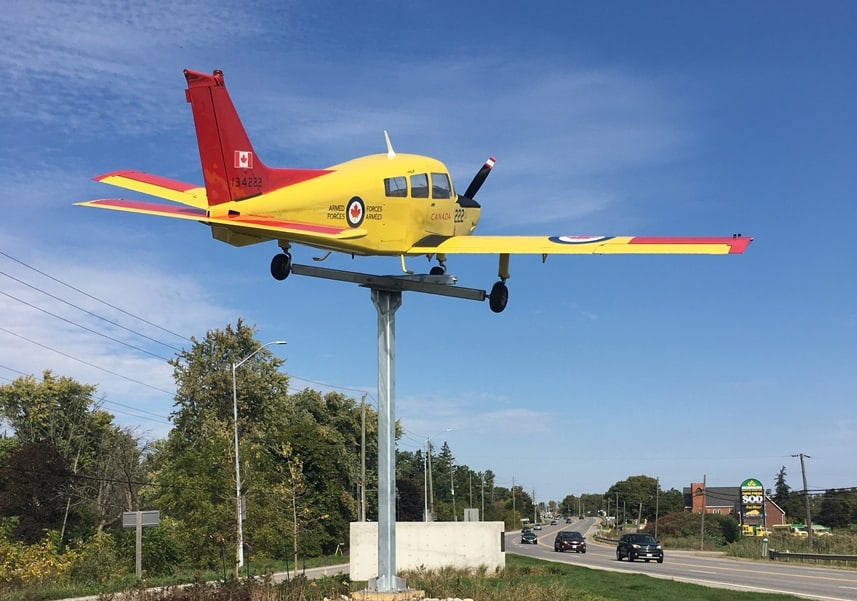 There will be no mistaking when you’ve entered the area of Mount Hope as the community’s gateway project has really taken off.

The City of Hamilton announced recently that as part of the Mount Hope Village Gateway Project crews completed the installation of a Beechcraft CT-134 Muskateer aircraft that will stand sentry at the south entrance to Mount Hope.

The bright yellow craft, which has been restored to ‘static condition’ and stands not just as a symbol of Mount Hope’s connection to the aviation industry but also as a piece of Canadian military history.

“The Beechcraft CT-134 Musketeer was a military training derivative of the Sundowner built by Beechcraft for the Canadian Forces,” a City press release said.

Mount Hope is home to the Canadian Warplane Heritage Museum and the John C. Munro Hamilton International Airport, which was a Second World War training facility.

This particular aircraft, which was built in 1971, was provided by Hamilton’s Canadian Warplane Heritage Museum, which acquired the plane back in 2012, about 20 years after it was retired from the Canadian Armed Forces.

The Beechcraft CT-134 Musketeer #222 was a single-engine, low-wing, four-seat light aircraft with fixed landing gear and a limited aerobatic capability.

The aircraft was delivered to No. 3 Flying Training School, located at Portage La Prairie in 1982 where it served there as a primary trainer before pilots transitioned to jets.

Since it retired in 1992, it had been dismantled and stored until the CWHM acquired it.

“This project would not have been possible without the generosity of the Canadian Warplane Heritage Museum (CWHM) and the collaboration between the CWHM, City staff and Ward 11 residents,” said Ward 11 councillor, Brenda Johnson.

“The result is a gateway that highlights our rich aviation history while welcoming both residents and visitors alike to the Mount Hope Village.”