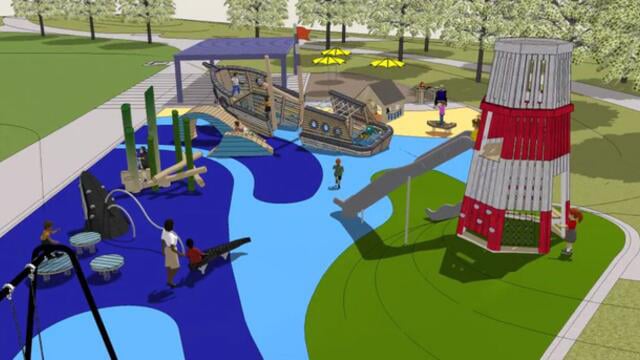 A new park in central Mississauga is nearly ready for its maiden voyage.

Fairwinds Park, which includes a nautical-themed play area and is situated in the midst of the 36-acre Pinnacle Uptown residential/commercial development at Hurontario Rd. and Eglinton Ave., is on track to be completed Oct. 25, said City of Mississauga Ward 5 Councillor Carolyn Parrish.

Parrish described the all-season park, which takes up nearly half of the 36 acres and includes two tennis courts and outdoor fitness stations, a basketball court, natural ice rink, an interactive public art feature, trail lighting and a parking lot, among other features, as a “one-of-a-kind” in Mississauga, and beyond.

“It really is gorgeous. It’s spectacular. It’s a significant park in the city,” said Parrish, adding the playground alone cost just under $1 million. Of that, the City picked up its maximum portion of $350,000, the builder, Pinnacle International, chipped in $250,000 and Parrish raised the rest “here, there and everywhere.”

Cooksville Creek flows diagonally through the park, which also features a sidewalk that links up with nearby Fairwind Dr. And a new fire station, completed in 2019, is located on the site just west of the creek, on Eglinton Ave. W. A sunken ship, a lighthouse that lights up at night, a beach section with “real sand”, small lifeboats on the playground and a whale complete the “sea and beach” theme.

Pinnacle International said they wanted to ensure greenspace and park facilities were a big part of the plan. They noted the park, which includes an HMCS Pinnacle ship, “features a significant amount of fun and family friendly amenities that will welcome both young and older residents.”

Parrish said she’ll organize a small, unofficial opening of the park and playground sometime soon after the Oct. 25 completion, with an official grand opening slated for next spring.