Starting in April, a new Canadian airline will be flying into and out of Pearson Airport in Mississauga.

Lynx officials said in a press release their goal is to make air travel accessible to all Canadians with ultra-low fares and a fleet of new Boeing 737 aircraft.

The airline’s inaugural flight is scheduled for April 7, from Calgary to Vancouver.

Congratulations to @Lynx_Air on the introduction of these new routes! We’re proud to have strong airline partnerships that open more doors to exploring our great country. Visit https://t.co/7reTTuwr3l to learn more. https://t.co/Wp2fCt0a5G

Four flights from Calgary to Pearson will be available the first week of operation, Lynx says, and that will increase to seven flights a week starting April 18.

Additionally, daily Pearson-to-Vancouver flights will be launched on April 28.

The airline will continue to expand in subsequent weeks and months, officials say.

”We have been delighted with the positive response to the news of Lynx’s arrival as Canada’s new ultra-affordable airline. As our booking site goes live, we are excited to bring our commitment to ultra-low fares to life, by offering special launch fares from $39 one-way,” Lynx Air CEO Merren McArthur said in the press release. ”By May, Lynx will be operating 76 flights per week and that is just the beginning. We will continue to add destinations and routes as we ramp up for the busy summer season, offering even more choice and flexibility to Canadians.”

“Lynx Air will provide more options for those travelling to other parts of Canada, while also giving visitors to Pearson greater opportunities to explore Ontario,” said Bradbrook. “We are pleased to welcome Lynx Air to our airport and look forward to continued partnership as they expand their services to and from Toronto.” 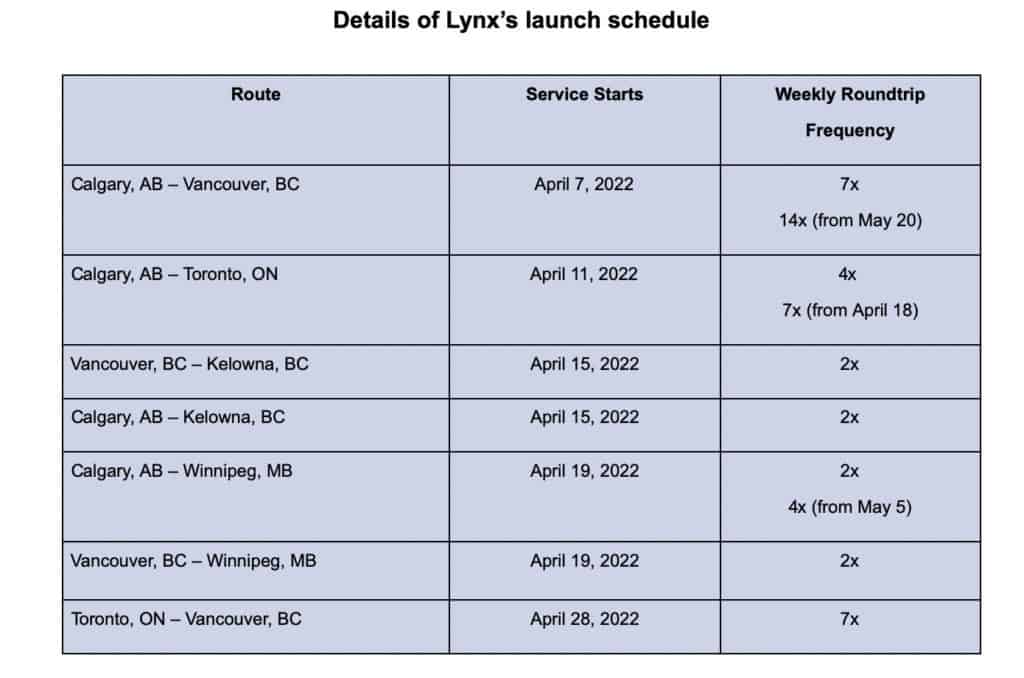