Nader’s – A Taste of the Middle East 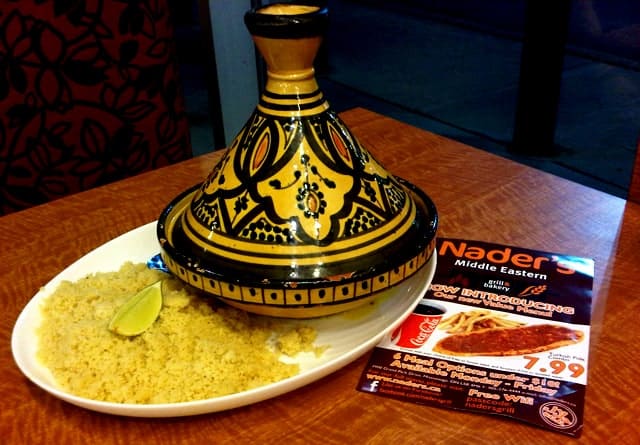 Nader’s Middle Eastern Grill & Bakery is located at the Grand Park Drive plaza, at the corner of Grand Park Drive and Burnhamthorpe Rd. West. Its presence is monstrous as it monopolizes 10,000 square feet of this residential plaza in a semi-cafeteria style/fast food/dessert bar/cafe/self-serve with a casual setting. It’s almost like the Marché Restaurant-type of set up, but specializes in Middle Eastern cuisine, which includes a massive 300-plus seat dining area, a hot tray station lined with typical fast food style menu boards, a pop and ice station and an extensive dessert bar section.

It’s quite confusing as you walk in and this is now my second time dining at Nader’s. It is not quite a restaurant but it boasts restaurant seating. The first time I dined at Nader’s, I had to place my order at the hot tray station located at the very back of this gigantic establishment – an awkward walk through the venue. I was given a number on a stand, paid for my meal, took a seat, then a few minutes later – voila! My food was served.

However, the second time I dined at Nader’s, I was greeted halfway into the restaurant by a server and went through the motions of dining in your typical restaurant style – take a seat, present me with a menu, take my order, bring my beverage of choice, serve my food, the obligatory questions such as “how is everything?” and “can I get you anything else?” and finally leave a tip. The inconsistency of the service to this day has me confused, so I’ll call Nader’s the non-restaurant which is trying to be one.

Due to the convoluted set-up of this non-restaurant, I couldn’t help my reluctance at eating here. What is it? A restaurant or a cafeteria? It’s all so confusing. However, once delving into the menu, I was intrigued to discover that it was filled with a variety of very hearty, flavourful dishes including a Moroccan Tagine, a variety of Stews, a Grilled Menu section including Filet Mignon, Lamb Chops and NY Strip loin Steak, Lentil Soup, Tabouli, Dolma, Turkish Pide, Burgers, Dessert Bar, and a Kids Menu. There is definitely something for everyone.

For a taste of the Middle East, I definitely recommend the Moroccan Tagine which, although it appears very bland in terms of colour palette, it definitely doesn’t lack in flavour and packs a tonne of punch on your palate. A tagine is a ceramic or clay style of cookware especially popular in Northern Africa. It consists of two pieces – a plate like bottom used for both cooking and serving the dish and a conical shaped lid. Nader’s Moroccan Tagine is a compilation of oven roasted meat (lamb shank or chicken breast) with vegetables and a medley of spices served with a choice of couscous or rice (Saffron Basmati or Spiced Afghan Rice). I had it with the Couscous and Chicken. It was a hearty and healthy dish at a decent price point of $12.99. The next dish was from the Grill section of the menu – Nader’s Tandoori Chicken Kebab which includes chicken pieces marinated in a Tandoori spice and grilled until it’s juicy and tender. It includes a choice of two sides including Saffron Basmati, Spiced Afghan Rice, Roasted Garlic Potatoes, Steamed Vegetables, House Salad or Fries. I had it with the Spiced Afgan Rice and the House Salad. The flavours spelt house-made, which is always a plus in my books, but the one complaint I have of this particular dish is the price. At $11.99, I would have expected at least two skewers of chicken but instead received only one! For my next visit, I would like to try their Turkish Pide (pronounced pee-day) which is basically a pizza – Turkish style. It’s made with an oval shaped pita bread and topped with savoury goodness like cheese, meats, and marinara sauce. Included in this next visit will be a sampling of the delicious assortment of traditional sweets including Baklava (a very rich sweet pastry layered with chopped nuts and drizzled in loads of honey), Kahk (date/nut filled cookies), and Kunafa (a dessert made with layered cheese in between thin Kataifi pastry dough and drizzled in a syrupy and gooey delicious mess). Warning: If you are allergic to nuts, you are SOL; steer clear of anything in the dessert section. The area is full of it.

Nader’s has been in the meat market business for 20 years serving the GTA – halal meat, that is. They started a halal meat market and grocery store back in 1991. Other notable mentions include the following: Nader’s Middle Eastern Grill & Bakery also offers free Wi-Fi (the pass code is nadersgrill); they have a Value Menu which includes 6 combos under $10; and everything is 100% Halal.