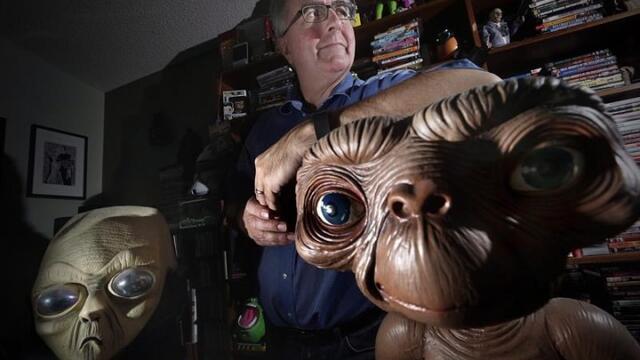 WINNIPEG — It was a clear afternoon when a man driving down a rural road in Alberta with his son saw a pie-shaped object levitating in the sky just before the thing rotated, turned black and suddenly disappeared.

“There were no windows, lights, lines or markings on the object’s surface and the edges were all rounded,” says a transcript of the man’s report made to Winnipeg’s Ufology Research.

“Within (one minute) of us seeing the object, we witnessed a military plane flying in the direction of our sighting.”

The report of the unidentified flying object was one of hundreds counted during the first year of the COVID-19 pandemic, says a report released Tuesday.

He said the total of 1,243 sightings last year is one of the highest recorded in a single year. Roughly 30 per cent of the sightings were in Ontario and 24 per cent came from Quebec.

The high number of reports suggests an average of three UFO sightings every day, he said.

“Anything that is seen in the sky that a person doesn’t think is a star, planet or plane is (a) UFO,” said Rutkowski, who has been collecting unusual sightings in the sky since 1989.

“That’s strictly an unidentified flying object by the definition.”

One person in Toronto reported seeing a UFO levitating 1 1/2 metres away from his balcony before it folded in on itself. A pilot flying from Thunder Bay, Ont., reported an object about a metre in diameter passing over the plane’s right wing even though his radar reported zero traffic in the airway.

Some sightings turned out to be a satellite, a plane flying at an awkward angle or light playing tricks, Rutkowski said. But 13 per cent were classified as unexplained.

“There’s a persistent phenomenon that won’t go away,” he said.

“It certainly is very, very impressive and causes (people) to report them to various agencies from police, RCMP, to national defence and other agencies.”

The astronomer said he doubts UFOs are being operated by an extraterrestrial being.

“As an astronomer, my background suggests there probably is alien life out there, but travelling between stars is very, very difficult.”

But, Rutkowski said, once in a while a police officer or a pilot, who are considered credible observers, report a UFO sighting and researchers have to take their sightings seriously.

“What do you do with those cases? Do you just chalk them up to one of those things? Or does that make you think there is something behind all the mystery and milieu?”

He suggested there could be two reasons why more Canadians saw objects that seemed out of this world.

Early in the pandemic, the U.S. government released videos of unidentified aerial phenomena recorded by the navy.

“That (drove) some people to look a little more carefully in the sky and believe that UFOs are a little more popular and frequent than one believes.”

It’s also possible the pandemic has caused people to think a bit more about their lives and to wonder if we’re alone in the universe.

“People were spending more time with their families, in their own backyards, and were … appreciating nature and what’s surrounding them (and) UFOs are a part of human culture.

“This is probably a way of just imagining what life is like in the universe, beyond the borders of our little blue speck in space.”

He adds that any being intelligent enough to travel between stars should have figured out some of the problems that exist on Earth, such as wars, famine and climate change.

Bright lights in the sky: A look at some of the UFO sightings in Canada last year

Jan. 23, 2020 — Someone shovelling snow off their Toronto balcony reported seeing a two-metre long object silently levitating about 1.5 metres away. As the person continued staring at the black and silver object, one side folded and disappeared.

Jan. 23, 2020 — On the same day near Guelph, Ont., a person reported seeing two bright lights following a plane. As the plane went in another direction, the lights continued moving forward at a fast speed and a massive circular object appeared behind the lights. The observer said it appeared the lights were escorting the UFO.

Feb. 3, 2020 — It was a clear day when a man driving down a rural road in Alberta with his son saw a grey pie-shaped object levitating in the sky just before it rotated, turned black and suddenly disappeared. Within the next minute, they saw a military plane flying towards the mysterious object. They said the round UFO had no windows or markings.

July 24, 2020 — A pilot of a North Star Air Ltd. plane heading to Sachigo Lake, Ont., from Thunder Bay, Ont., saw an object pass over the plane’s right wing. The pilot said the UFO was about one-metre in diameter. The plane’s radar indicated there was no object in the vicinity.

Aug. 30, 2020 — A man in Ottawa pulled out his binoculars after observing an object with flashing lights hovering in the clear sky. He described the chevron-shaped UFO as black with green, blue and purple with flashing lights underneath. He also said his wife confirmed that the object levitated in the sky for about 20 minutes before it moved west.

— By Fakiha Baig in Edmonton