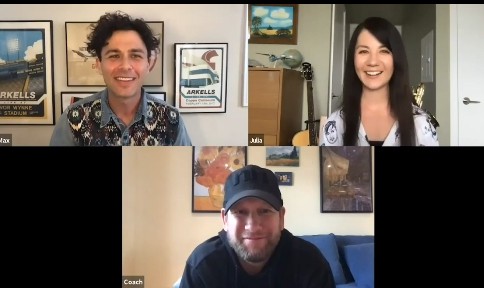 A Mississauga music teacher has received a very special gift courtesy of Nick Nurse and with the help of Max Kerman of the Arkells.

Julia Jung, a music teacher at St. Aloysius Gonzaga Secondary School in Mississauga is a big fan of both the Hamilton-based rock band the Arkells, and the Toronto Raptors.

When Jung learned her students wouldn’t be returning to classrooms due to the pandemic, she loaded up her car with as many instruments she could fit and dropped them off one-by-one to her students at their homes.

Kerman has been hosting online music classes through Instagram Live, where he first spoke to Jung. After listening to Jung’s story, Kerman organized a meeting between Jung, and Raptors head coach, and underrated rock star, Nick Nurse.

It’s been well documented that Nurse loves music—he was captured disembarking from the team plane in Milwaukee with a guitar slung over his shoulder before the Raptors took on the Bucks in the NBA Eastern Conference Finals last summer.

Additionally, after the Raptors historic championship run, Nurse performed on stage with the Arkells at a show in Toronto at the Budweiser Stage.

Through Instagram, Kerman introduced Nurse and Jung, and Nurse announced his foundation, the Nick Nurse Foundation, would be providing Jung with $25,000 worth of new instruments for her students.

Jung was incredibly appreciative of the gesture.

“By having more instruments we’ll make sure we don’t have to reduce the number of kids in classes,” Jung said in a video posted to the Arkell’s Instagram page.

Nurse also promised that when fans are permitted to once again watch NBA games in person, she’ll be in attendance as his “special guest.”

Further, according to Kerman, MusiCounts will be helping Jung distrubute the instruments to her students.

“I’m going to need a bigger car,” Jung said in the video.