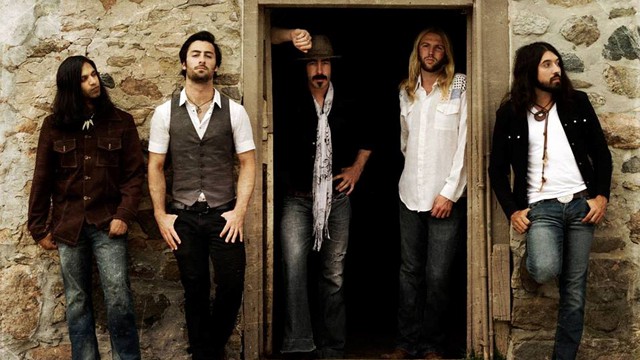 We’re a blend of Classic and Blues Rock inspired by the melodies, grooves and dynamics of bands such as the Allman Brothers, The Black Crowes, Led Zeppelin and Blind Melon. We draw our influences from all music that is good which usually tends to be music dating  pre 1975 🙂

Tom Petty, Jack White or Fleetwood Mac. They’re all on tour at the moment. We’d love to open up for any or all of these bands.

We are always doing music so there’s very little time left to do anything else but if we do have spare time, we tend to get together on one of Queen Streets many patios, enjoy the heat while it lasts and bar hop until we find a good live band we like and have a few more. Individually, some of us go on camping trips, International Music festivals/etc. Darren has his own Radio show on CFRE he hosts. Sasha and I are really into cooking and dining.

Darren and Jeff grew up in Mississauga and met while they were attending Iona Catholic Secondary School. Darren stays very active in the community and is a member of the Mississauga Arts Council and a part of Limelight.

Stone River’s favorite place to play in Mississauga is Celebration Square. We love the stage. There’s always a diverse crowd looking to hear great music and the staff always treats us very well.

We draw our inspiration from many different sources. Including our personal lives, what goes on in the world, our feelings and extreme emotions, bands that inspire us. It’s hard to say. We love playing live but we also love the creative process of writing.  It is very exciting to stumble on a great musical idea and then further develop it

There’s nothing more rewarding than working on a piece of music, recording every little part, the lead guitars, drum bits, the harmonies and listening back to it for the first time. It’s like seeing your new born child for the first time.

I could fill this whole page with our favorite musicians but here are a few off the top of my head: Led Zeppelin, the Allman Brothers Band, the Rolling Stones, Blind Melon, Black Crowes, Ray Charles, Johnny Winter, Eddie Vedder, Rare Earth, Doobie Brothers, Van Morrison, Bob Dylan. Their work inspires us to create.

5 things SR can’t live without ? Each Other, FACTOR, Sarcasm, Positivity and Vinyl

The coolest gig we have ever played was when we had the opportunity to open up for the mighty Black Crowes in front of a crowd of 15000+ people. It was the first time we’ve played to a crowd that size and it was a very important moment in the band’s history.