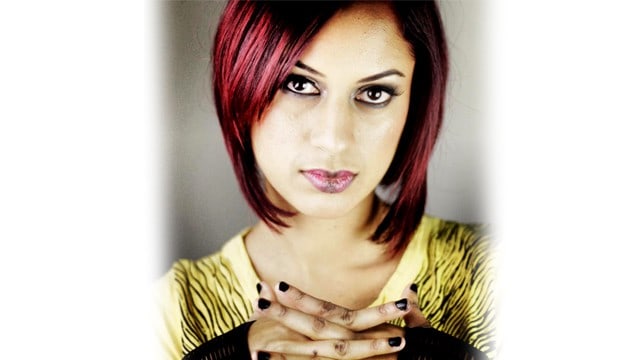 We recently caught up with up and coming musician from Mississauga with a unique sound, Shyann.

I’m a singer/songwriter who released ‘Into The Ground’, a dark “Trip-Pop” jazz-influenced album collaborating with talented producer Nick Name.

Ten years from now you will be….

Portishead. Or the Black Keys. They put on a hell of a live show.

Sleep? haha naw…. in all honesty, when I’m not working on my own music, I still immerse myself in music as a listener. Ask anyone who swings by Casa de Shyann, there’s always something playing on the speakers 🙂

When it was open, The Lost Lounge inside Executives Snooker Club. It was this hidden gem in Mississaugafor indie music, and was actually the place where I first met producer Nick Name when he was playing in this awesome pop/ska band, Club Treehouse. The place invited some serious local talent.

I draw inspiration from the things that are happening around me. I think it’s hard to tap into something lyrically that you are not directly or indirectly experiencing. And while I was writing for the album, I was definitely going through a rediscovery phase in my life, one where I started questioning the purpose of doing things just because you’re “supposed” to. I never understood why people so easily accepted that.

My favourite part of the process would be seeing an idea come to fruition. For example, I may have a melody in my head, coupled with certain chord progressions. It’s one thing to have an idea in your head and another thing altogether to a) execute it & b) be happy with the results. When it is executed properly (ie: you’re happy with your vocal recordings, any harmonies & all instrumentation), It’s a pretty rewarding feeling, for both producer & artist.

Do you ever get nervous before performing?

Of course. I wonder if that ever truly goes away… I think the more the music means to you, the more you have riding on the line, even if it’s unnecessary worry. But after the first few songs, all the practice & musicianship between band members starts shining through and that annihilates any butterflies 🙂

One of my favourite bands is Radiohead… cuz they commit themselves to their sound, and don’t make music to fulfill their audiences’ musical needs but rather their own. Many criticize the directions they’ve taken musically but honestly, they aren’t afraid to switch up their style and that takes guts. Which is why they will always have a cult following.

What are the five things you can’t live without?

Music (that’s an easy one), my vocal chords (I get oh so cranky when I lose them haha), my loop machine (for those who have seen the live show or been to my crib, they know what the deal is!), television (that’s right) and my family & friends, who keep me in check 🙂

Yes! My debut album ‘Into The Ground’ is on sale now!!! You can download digital copies on iTunes or Bandcamp: http://shyann.bandcamp.com or buy a physical CD at: http://www.shyann.ca/sounds

The production is craaaaazy (care of Nick Name) and I really feel like we found our own unique sound in this collaboration.

What high school did you go to?
-Cawthra Park Secondary School

Favourite food?
– Anything deep-fried. Kidding, as a chick with IBS, I guess I’m supposed to say something healthy, like brocoli. But the real answer…. a large supreme pizza from none other than Pizza Hut.

Favourite place to eat in Mississauga?
– Alioli Ristorante – they have awesome Italian food & a warm, friendly environment 🙂 Their ravioli dish is scrumtrelescent.

Timmies or McD’s coffee?
– I don’t drink coffee though I do get my daily tea fix at Timmies.

Last song listened to on your ipod?
– The Man Who Sold The World – Nirvana….  I actually have it on repeat as we speak 🙂