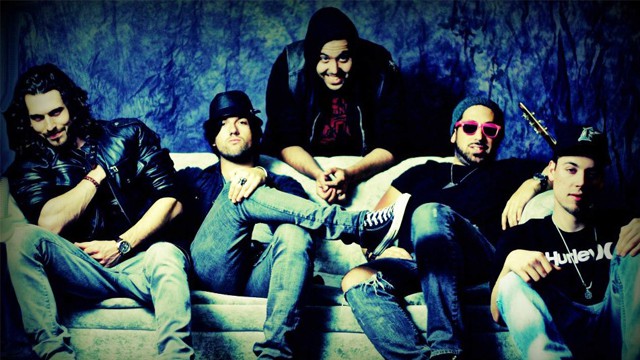 We recently caught up with Bryan Fontez the lead singer of the band Last Bullet:

For our readers who have never heard your music, explain your sound in 140 character:

Ten years from now your band will be….

As successful as possible depending on the amount of work, money and time we invest. Which at the current rate we’re going will make us extremely successful.

Black Sabbath is back so that would be legendary. But a more realistic match would be Airbourne or Rival Sons.

I’m a big fan of Mixed Martial Arts and I write part time for lowkick.com, so I enjoy catching up with news and writing articles, I also love film, watching Hockey, I like to cook, travel and I jog about 10km daily so I love throwing on some tunes and running long distances.

I moved to Mississauga and spent a solid portion of my life in Streetsville. I moved from Brampton at the age of 16 and completely fell in love with the people, vibe, small shops and natural beauty of Streetsville.

In fact a weird connection is that the guys from Billy Talent also happen to be from Streetsville as well and we happened to record our album at the same studio as them in North York. Which was a very cool experience.

My favourite place to perform was at a small bar in Streetsville right on Main/Queen street called “Marcello’s”. It isn’t there anymore, I think he closed it down, but we played there once and I’ll never forget it. It was tiny and rammed but Marcello himself was an extremely eccentric and interesting man to say the least.

He always enjoyed introducing the band that was about to perform every weekend and when he saw his bar packed with a screaming crowd he took it upon himself to spontaneously produce one of the most epic introductions we’ve ever received. That was a good time lol.

As cliché and boring as this answer is, I use life as the inspiration most of the time. The more screwed up things can get, the easier it is to create something interesting ironically. Normal lives don’t seem to make for good songwriting I find.

Although there are many times when I write lyrics based on a vibe and an attitude and not an experience. There really aren’t any rules when it comes to writing music, as long as you can get it to come out the way you hear it in your head, then you’re doing it right.

Dave Grohl is my biggest inspiration for his passion first and foremost. The man exudes honesty and transparency, he is exactly what he presents himself as and he doesn’t apologize for it or make any excuses. I also like that he’s a big advocate of making mistakes. Rock N’ Roll is not a perfect genre of music, it’s known for it’s soul, it’s feeling, it’s attitude and energy, not how perfect the pitch of your voice is or the strings on your guitar or the rhythm of the drums.

Chris Cornell and Steven Tyler for having what I believe to be the best voices in Rock N’ Roll history. The things those two men can do with their voices are literally unbelievable.

The coolest gig we’ve ever played BY FAR, was Toronto’s annual Youth Day Festival. We played to a crowd of thousands at Yonge and Dundas Square. That performance was unforgettable. I’ve personally never been soo excited to play for a crowd in my life. It felt amazing and I hope that we get to do something like that again this year.

We’re in the middle of filming our first official music video and we’ll be headlining a huge show at The Opera House June 15th. Stay in touch and get all the details by visiting us on our website or facebook : D

What high school did you go to?
Bramalea Secondary School, but I went to Port Credit Secondary for summer school two years in a row.

iPhone or Android?
iPhone but I’m warming up to Android

Timmies or McD’s coffee?
If you know coffee you’d know Timmies is horrible. McDonalds actually has some decent coffee. More importantly, why is Starbucks not an option??

Last song listened too on your ipod?
Jordan by Rival Sons