Despite declarations from the 'freedom convoy,' a new McMaster University-involved study suggests the majority of Canadians support most of the mandates and lockdowns. THE CANADIAN PRESS/Jeff McIntosh

The majority of Canadians support most of the measures employed by federal and provincial governments to prevent the transmission of COVID-19. That’s according to one of the largest continuing studies of Canadian attitudes toward the pandemic by McMaster University’s Digital Society Lab in Hamilton, Ontario and Vox Pop Labs.

The occupiers who refer to themselves as the “freedom convoy” have dominated headlines this week. The group claims to be standing up for the freedoms of Canadians by protesting government-mandated vaccines and lockdowns. Data from an ongoing opinion study suggests, though, the occupiers represent a minority view across the country.

Their data suggests that not only do most Canadians currently support the measures, but support has also remained relatively stable since the beginning of the pandemic.

“Overall, our findings suggest that Canadians are growing increasingly wary of the pandemic and its management by our political leaders, but are by and large resolved to support the measures being put in place by the federal and provincial governments to try to see us through,” according to the study’s authors.

“While this may not be the sense that one gets on the streets of Ottawa this week, these results reflect that it is the position of most Canadians.”

Vaccine mandates received high levels of support among Canadians in the study. The data indicate that approximately four out of five Canadians agree that health care and long-term care workers should be required to be vaccinated against COVID-19. Roughly three out of four Canadians believe vaccines should be mandatory for government workers and politicians. 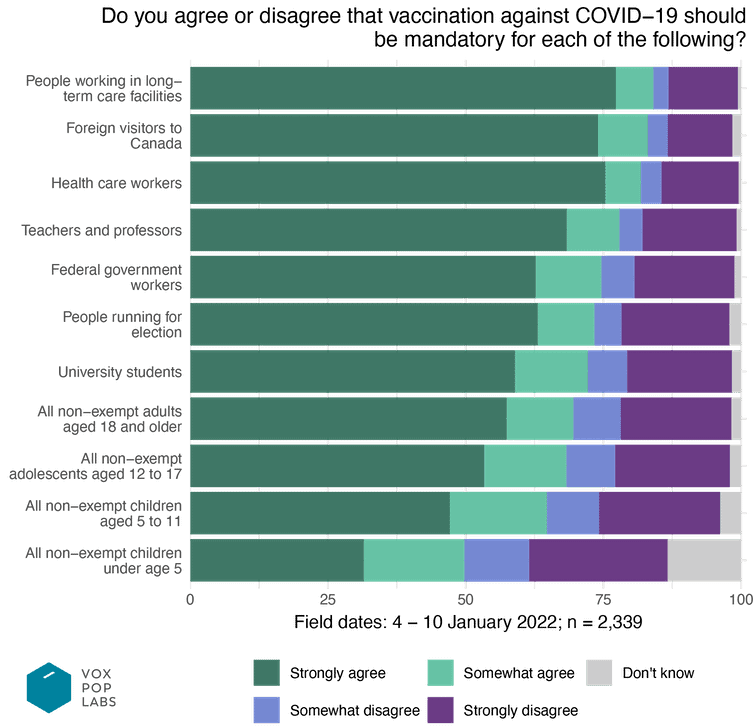 The study also showed 70 per cent support for a vaccine mandate for all non-exempt adults over the age of 18. That support declines slightly when it comes to mandatory vaccines for teenagers and adolescents, and drops to just under 50 per cent for children under the age of five.

A majority of Canadians agree with the requirement to provide proof of vaccination against COVID-19 for certain activities. Nearly four out of every five Canadians support vaccine passports for air or cruise ship travel. Support goes down slightly for proof of vaccination in venues such as movie theatres, restaurants, and gyms. 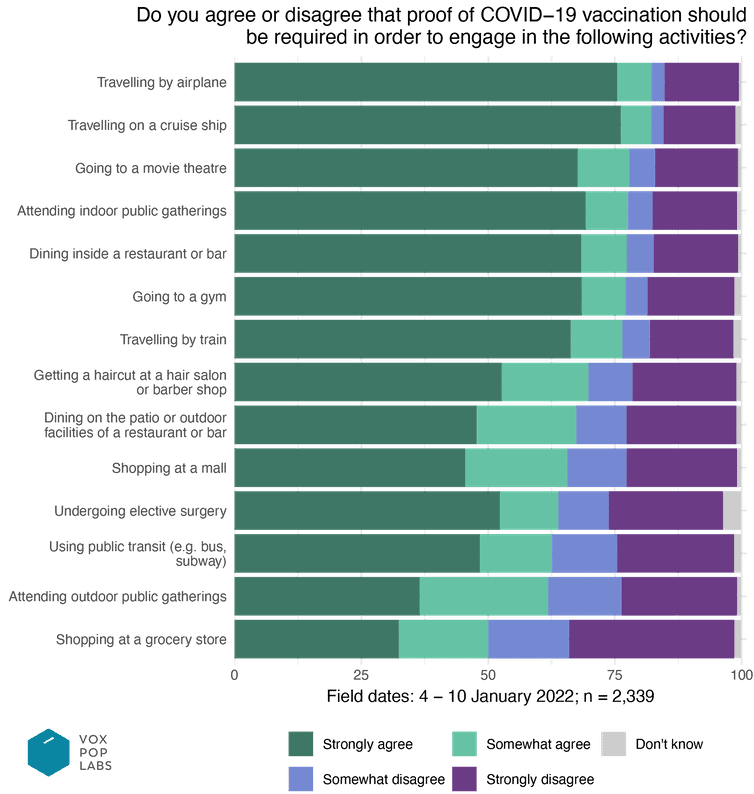 There is a lot of support for most government-imposed restrictions associated with COVID-19. The highest level of support for restrictions is with respect to nursing homes, but respondents also indicated widespread agreement with restrictions on international travel, bars and nightclubs, and stadiums. 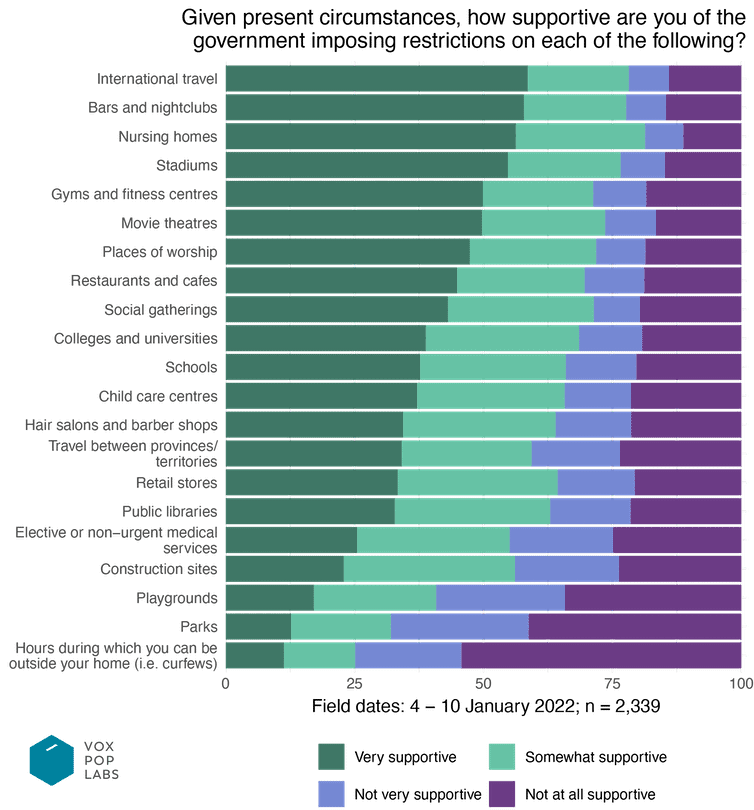 Even school and daycare closures received majority support with 66 per cent of Canadians strongly or somewhat agreeing with such measures given the circumstances at the time.

“Our objective in reporting the results of this study is not to pass judgement on the views of the ‘freedom convoy’ demonstrators or their supporters,” according to the study’s authors. “We simply offer a series of empirical tests of the claims that those views are widely shared among Canadians. Our analysis of the data from the COVID-19 Monitor indicates that such claims are significantly exaggerated.”

The COVID-19 Monitor was created in March 2020 and is a study of Canadians’ attitudes relating to the COVID-19 pandemic and public policy interventions. More than 100,000 respondents have taken part.

According to the study’s authors, the most recent wave of the study was conducted online from Jan. 4 to 10, 2022, and was completed by 2,339 respondents randomly selected from the Vox Pop Labs online respondent panel. They say respondents were weighted by census estimates of age, education, region, sex, and vote choice in the 2021 federal election to reflect a representative sample of the Canadian population.