We hope you enjoyed the brief respite from the cold, Mississauga, because it sadly must come to an end.

According to a recent report from the Weather Network, temperatures are set to fall below the freezing mark once again, with some light snow expected on Saturday morning.

“While parts of southern Ontario enjoyed its warmest day in weeks on Thursday, a significant interruption to the milder pattern comes this weekend as temperatures plunge below seasonal values once again,” the report says.

Temperatures are expected to remain a few degrees cooler than seasonal throughout the coming weekend, while a widespread 2-5 cm of snow is forecast early Saturday.

This is corroborated by Environment Canada’s weekend forecast for Mississauga, which calls for a high of only 1 degree Celsius and chances of flurries on Friday evening, Saturday, and Sunday. 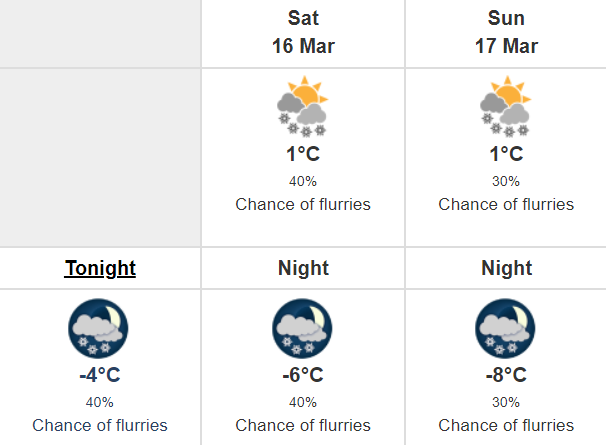 However, if you’ve had enough of the snow and cold, then rejoice — it looks like this may be the last bit of winter weather we get for the season.

“Later next week, milder air will make a return to kick off the official start to spring with an even milder trend expected for the first half of April,” the report concludes.

These Square One stores have officially reopened in Mississauga
Last week, Mississauga was officially given the go-ahead to enter stage 2 of the province's three-phase reopening plan, which meant that local indoor malls, salons and restaurant patios could final
END_OF_DOCUMENT_TOKEN_TO_BE_REPLACED