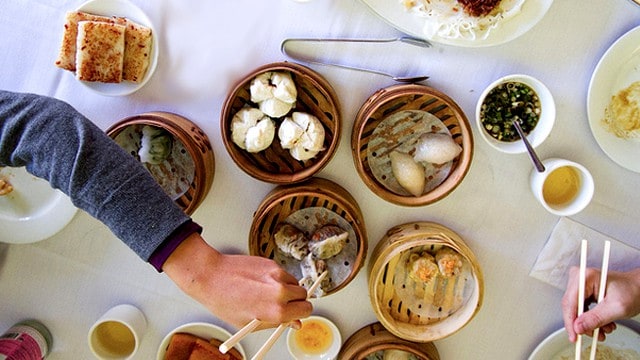 Okay, so Mississauga isn’t exactly the Upper Eastside when it comes to late night dining but that doesn’t mean we don’t have anything to offer for you late night tile cutters.  Here it is the top 5 locations to dine after 2 am.

Pho Do Thi is also located in the 5 and 10 block and is open super late, or should I say super early – until 6 am on Friday and Saturday to cater to the hardcore partiers and shift workers. Of all nights, the place was packed late on a Monday night. The resto has approximately 60 seats with about five of the tables set as communal tables. The broth was flavourful and the service prompt despite the packed house. 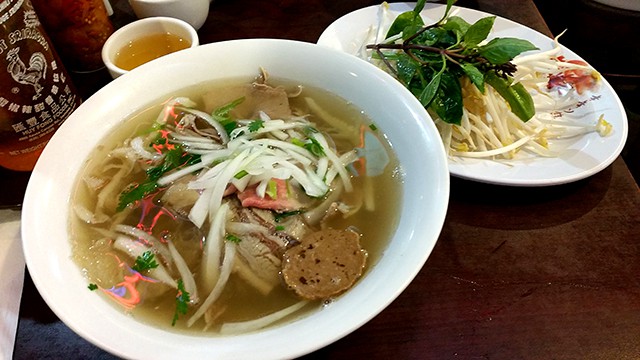 Nothing beats a night of clubbing at My Apartment like some good old burgers at Fire Pit. Of course you can’t forget their signature huge onion ring you get on top of your order of fries (as seen above). That onion ring tastes so good after 2am. Prices are reasonable, the portions are good, the food is always consistently delicious and it’s a great alternative to McD’s and BK. 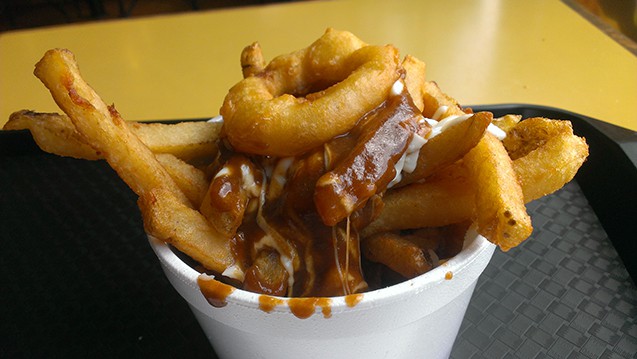 This 24-hour joint serves almost everything from breakfast to burgers, but it’s known for its Greek food. I ordered the pork souvlaki and it boasted the biggest chunks of pork I have ever seen in the pork souvlaki world. The full menu includes a variety of possibilities to satisfy any individuals needs, ranging from Steak on a Kaiser, Fish and Chips, Steak Dinners, Banquet Burgers and Chicken. 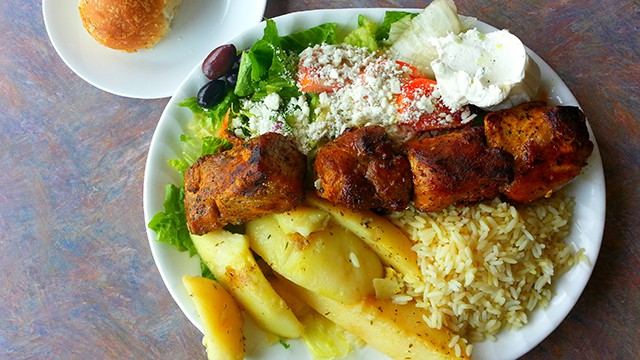 On the southeast corner of Burnhamthorpe and Creditview you will find Owl of Minerva, which features such dishes as the Pork Bone soup. This is a great Korean joint that is hidden unless you or a buddy know about it. There’s no shortage of good Korean joints in Mississauga, but none have as much variety as Owl of Minerva. I have yet to find any place to have kimchi fried rice, stir-fried rice cakes, hand-pulled noodles in soup and two dozen other items on the same menu anywhere else. 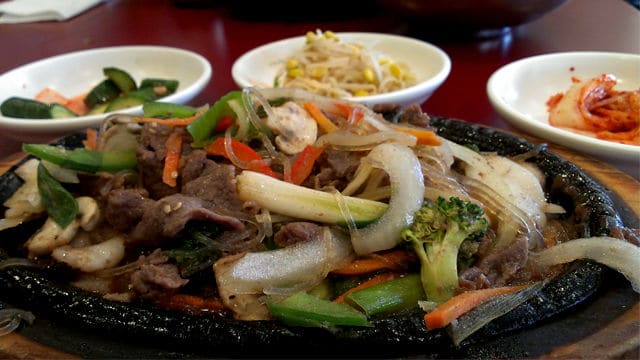 Yep you guessed it, Tremendous.  The name says it all.  Only a Chinese person would name a restaurant after an adjective.  I remember going to this joint as a kid after Sunday mass for dim sum.  I preferred their wonton soup but lately it seems I’ve upgraded my taste buds to Beef Brisket soup w/ egg noodle (only $4.75).  What makes this place so tremendous is their 24 hr dim sum.  Everyone has their own thoughts as to what good dim sum should be or look like, but I kid you not, their dim sum be damn good son!

Another hit that got me through many a drunken night had to be the General Taos’s Chicken, bone in.  Don’t let anyone convince you to get the bone out, white meat crap; you’re there for a reason, to chow down and to scope out the late night scenery.

Smoke’s has been spreading like gravy-coated wildfire across Canada and is even stretching its uniquely Canadian tentacles into the U.S. market. Smoke’s opened their first Mississauga location at Lakeshore and Hurontario in Port Credit back in early 2015. On the menu it’s all poutine and you will find traditional poutine, bacon poutine, pulled pork poutine, perogy poutine, chicken peppercorn poutine, chicken fajita poutine, Nacho Grande poutine, chili cheese chicken poutine, steak stroganoff poutine, Veggie Deluxe poutine and more. Opened to 3am on Thursday and 4am on Friday and Saturday.

Wally’s Family Restaurant located minutes away from the Square One area is one of the best and well known greasy spoons that has been around ever since I can remember. With the orange seat covers covering orange vinyl seats this place is old school. You can get breakfast or dinner but for late night eats there is nothing better than Wally’s hamburger and fries.