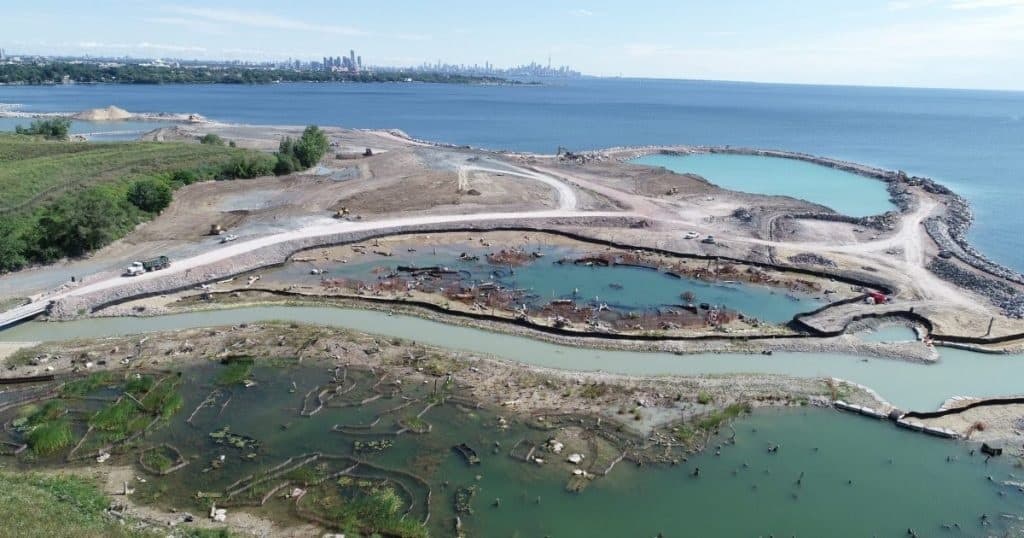 A 64-acre conservation area being developed along Mississauga’s waterfront that’s expected to be an environmental “gem” has already begun winning prestigious awards.

The Jim Tovey Lakeview Conservation Area was recently named winner of one of this year’s Brownie Awards, which each year recognize and celebrate organizations, people and projects across Canada that are dedicated to rehabilitating brownfield sites that were once contaminated, under-utilized and underdeveloped.

It was announced in late November that the Jim Tovey conservation project won the “Reach Out” award for excellence in communications, marketing and public engagement.

Cities of Mississauga and Toronto in addition to other organizations that include Lakeview Community Partners, builders of the nearby massive Lakeview Village community, also support the project that will create a new conservation area along the Lake Ontario shoreline in east Mississauga when it opens in 2025.

The “Reach Out” award recognizes CVC for its use of Public Information Centres to connect with the community, its engagement with the Mississaugas of the Credit First Nation regarding detailed design, a direct email channel and an option to sign up for updates through the project website.

Built on a previously degraded section of shoreline and named for the late City of Mississauga councillor who worked to bring the project to fruition, the Jim Tovey Lakeview Conservation Area reuses construction rubble and fill as a sustainable resource to create a greenspace that will connect the community back to Lake Ontario, project leaders say.

“It is an incredible honour for the Jim Tovey Lakeview project to be nationally recognized for its innovation and dedication to transforming the Mississauga lakeshore into a thriving greenspace for both the community and wildlife,” said Kate Hayes, CVC ecosystem restoration and stewardship senior manager. “This award is a testament to the considerable effort from CVC and our partners to foster meaningful communication and engagement with the community to ensure the ongoing and future success of (the conservation area).”

Janice Hatton, project manager with the Region of Peel, added that along with other partners, “…we’ll transform the area into a hub for passive waterfront recreation, a hotspot for wildlife migration and a green oasis in the heart of the city.”

The Brownie Awards were founded in 2001 by the Canadian Urban Institute.

The Jim Tovey conservation park is taking shape alongside the huge Lakeview Village community being developed over the next decade or so.

A restored Serson Creek now flows into the conservation area. The creek was disconnected from Lake Ontario in the mid-1960s, when it was buried and piped underground, essentially becoming one of Mississauga’s “lost rivers.” Lost rivers are waterways that have been buried beneath ground to make way for development.

Restoration of Serson Creek began in 2016 when the CVC, Region of Peel and TRCA started work on the new conservation area.

Lakeview Village and the Jim Tovey conservation area are being developed on the site that was once home to the Lakeview Generating Station. It was shut down in 2005 complete with the controlled demolition of the iconic smokestacks known for decades as “The Four Sisters.”