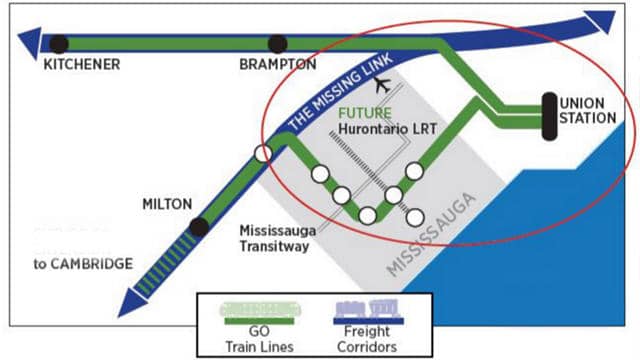 Remember the Missing Link? It was touted as transportation salvation by the elected leaders of Toronto, Mississauga, Milton and Cambridge as a way of getting heavy freight off GO train commuter lines to achieve that elusive dream of all day, two-way GO service.

If you’re a resident of the aforementioned municipalities, you really shouldn’t have a problem. But if you live a bit further out east, say, in Vaughan, Markham, Scarborough or even Pickering, then you may have a problem with the Missing Link. A project that benefits Mississauga and Toronto has found opposition from neighbours out east.

Ricardo Mashregi is the chair of the Grandview Area Residents Association of Thornhill Markham. Insauga reached out to him via email to get this thoughts on the Missing Link, and we provided a copy of our last article on the Missing Link as background. Suffice it to say, Mr. Mashregi had some extensive and colourful opinions in a substantive email response. The following is a condensed version of the concerns and proposals he outlined to Insauga.

In our article, we asked an open ended question, “Why in 2016 are we in Mississauga are still transporting freight that could possibly be carrying hazardous materials through a heavily urbanized area”. Mr. Mashregi said York Region, specifically Vaughan and Markham, are in the same situation; they are also heavily urbanized areas. The Yonge-Steeles Corridor is earmarked by the province through the ‘Places to Grow Act’ for further intensification. York is no longer just 6.2 km of rural countryside with some farms in between; it’s on par with Peel Region and Toronto as a growing urban/suburban area.

Mr. Mashregi also said that York Region residents also deserve to be safe from hazardous materials being trekked through their communities, just like the residents of Toronto, Mississauga, Milton and Cambridge. In the area his association represents, there are two elementary schools within a half kilometre of the rail tracks and now, that is being compounded by adding more freight traffic to that existing track?

Mr. Mashregi then outlined some specific concerns about the Missing Link:

The Missing Link report leaves Markham, Vaughan, Scarborough and Pickering with the potential for increased volumes of freight train traffic, which would include those freights carrying explosives, toxic and dangerous materials through one of the densest and fastest growing population centres in the GTA. These trains would be in addition to dozens of freight trains that already pass through their neighbourhoods on a daily basis. Rerouting would also require the construction of new tracks through already congested areas.

Mr. Mashregi also had criticisms on how the Missing Link report itself, saying it represents a poor way of governments to make critical decisions potentially affecting the health and lives of thousands of their residents without direct participation in the process. Since the report was commissioned by only Mississauga, Toronto, Milton and Cambridge specifically with the western GTA are beyond’s priorities in mind, it left out the concerns and priorities of these municipalities’ northern and eastern neighbours. No consideration of the potential affects the Missing Link (if implemented) will have on other communities. No opportunity to be heard. No transparency in the process.

So what does Mashregi and those he represents want? They actually have an online petition with all the details and their demands outlined. Basically, he and the other ratepayers associations would like a reexamination of the plan in a fact-based, transparent manner. There has to be an opportunity for stakeholders and their experts/consultants to be heard in a public forum. According to Mr. Mashregi, rail safety is not something that should be decided behind closed doors. He tells me this is not NIMBYism, but more like dumping from the Missing Link proponents, and that it’s unreasonable and objectionable that we (the Missing Link municipalities) would do this to them (York Region and others).

It seems that there are some storm clouds gathering around this era of regional and intergovernmental cooperation. Those political leaders whom we have entrusted to spearhead these kinds of initiatives have some work cut out for them. The municipalities who signed the Missing Link agreement were concerned about moving freight westbound away from them, but they didn’t think about the freight moving eastbound?

Perhaps Mayor Crombie should pick up the phone or get her staff to get in touch with their counterparts at York Region to resolve the problems surrounding the Missing Link. Mississauga City Council got extremely incensed a few weeks ago when they heard they might be on the hook for $470 million for John Tory’s SmartTrack, because they were never consulted on it, so it should not be too surprising that our neighbours out east have the same kind of concerns over a lack of consultation over an issue that has the potential to make things worse for them, at the expense of making Mississauga and Toronto feel better.