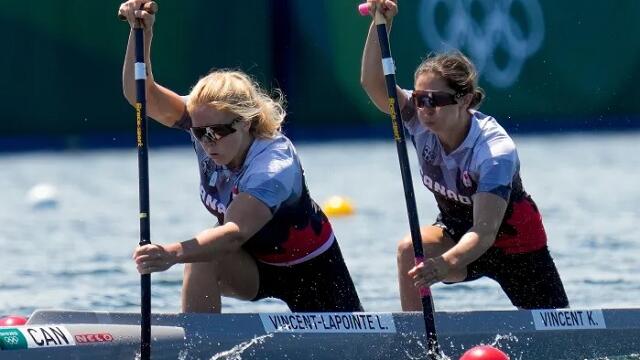 Mississauga’s Katie Vincent is a world champion, and now she’s an Olympic medallist.

Vincent and Laurence Vincent Lapointe paddled their way into Canadian Olympic history on Saturday, reaching the podium in a debut event and raising the nation’s medal tally to its most ever in in a non-boycotted Summer Games. The tandem won the bronze the inaugural Olympic women’s 500-metre canoe double sprint final. Outlined against overcast skies, they reached the finish line in one minute 59.041 seconds at Sea Forest Waterway in Tokyo.

The two women, who had to wait for the Olympics to add the event for women, and wait another year to compete in it after COVID-19 postponed the games by a year, celebrated by accidentally-on-purpose falling out of their canoe and into the water.

The medal is Canada’s 23rd of the games. The former mark of 22 was set in Atlanta in 1996 and matched in Rio de Janeiro in 2016. (Canada captured 44 medals at the 1984 Los Angeles Olympics, when the former Soviet Union led an Eastern Bloc boycott of the competition.)

Seventeen of the 23 medals have been won by women or women’s teams.

Vincent, a member of the Mississauga Canoe Club, was eighth in the women’s 200-metre canoe sprint (also known as C1 200) on Thursday, when Vincent Lapointe won the silver medal.

(Photo by The Associated Press.)