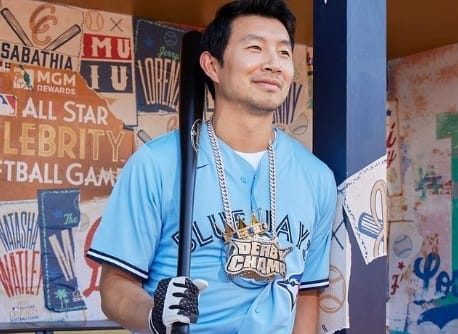 Mississauga native and Hollywood action movie star Simu Liu has been busy the past 18 months or so beefing up his celebrity resume–and by most accounts he’s been pretty successful, to say the least.

But can the 33-year-old star of Marvel’s 2021 mega-hit Shang-Chi and the Legend of the Ten Rings swing a baseball bat and field a hard-hit ground ball?

Donning a classic Toronto Blue Jays’ powder blue jersey this past Saturday (July 16), Liu set out to show what he’s made of on the diamond when he took part in Major League Baseball’s All-Star Celebrity Softball Game in Los Angeles.

It’s one of a series of high-profile events scheduled in the leadup to Tuesday night’s featured attraction at Dodger Stadium–MLB’s 92nd All-Star game pitting American League stars against their National League counterparts.

Just prior to the celebrity-packed softball contest, Liu traded in his smart-looking Jays digs for a reimagined Brooklyn Dodgers jersey worn by he and his teammates.

“I’m not gonna lie; I’m a little intimidated. I’m hoping, you know…let’s say one homerun. That’s my prediction,” Liu says in a video posted to MLB’s Twitter page (see below).

No boxscore was available from the game, so it’s unclear if Liu banged out a base hit or two–he did not hit a homer–or if he saved a run with his glove.

But a few still shots posted to the Toronto Blue Jays Instagram page show a rather stiff Liu in the batter’s box holding the bat and primed to hit.

He was joined on the diamond for the celebrity game by, among others, actors Rob Lowe, J.K. Simmons and Bryan Cranston, musicians Bad Bunny and Quavo, WWE star The Miz, a few comedians and former MLB stars Shawn Green, Hunter Pence, C.C. Sabathia and Andre Ethier.

We've got high expectations for the #CelebSoftball Game!

And so do these celebs! 👀 pic.twitter.com/WcWxDXWJkF

Away from the baseball diamond, the Mississauga movie star has chalked up plenty of recent success stories.

Just a couple of months ago, Liu took to social media to let people know he’s part of a popular annual feature on the cover of TIME magazine this year.

The Marvel Cinematic Universe star, who’s beefed up his resume in the last eight months or so by winning a pair of People’s Choice awards and hosting an episode of the iconic Saturday Night Live in New York City, has been chosen one of TIME’s 100 most influential people of 2022.

“Shocked, grateful, honoured and terrified to be included in one of the (TIME) covers this year!!” Liu posted to his Twitter account at the time.

“But beyond me…this is about the importance of representation. Thanks to all who came before, and who will come after. It’s a privilege to bear the torch for a brief moment.”

Liu always seems to be where the action is these days–both on the big screen and elsewhere.

Just over a month removed from his well-received, playful onstage performance as one of the presenters at the Oscars in Los Angeles in late March, Liu hosted the Juno Awards, Canada’s biggest celebration of homegrown music, in mid-May. 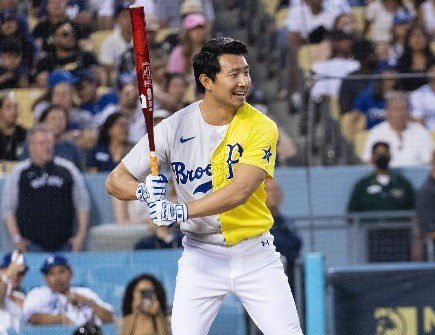 The Mississauga native has also released his first book and learned last December that a sequel to Shang-Chi and the Legend of the Ten Rings is in the works.

Liu, former star of CBC sitcom Kim’s Convenience, received largely positive reviews for his charmingly “Canadian” onstage performance as one of the presenters at the Oscars on March 27.

The action star and American comedian Tiffany Haddish teamed up to present the Academy Award for Best International Feature Film.

Just prior to announcing the winner, the pair pulled off a funny little shtick centered around a few Canadian jokes–and they did so in low-key, tasteful fashion while showing some genuine onstage chemistry.