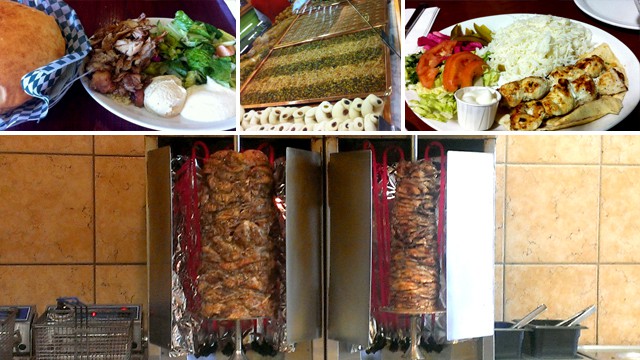 Now, let me tell you the straight goods about Middle Eastern food. If it’s fresh, it is the best food on earth, I mean the taste of charcoal roasted chicken, lamb or beef along with garlic, fresh pita, olive oil and zatar ..it’s absolutely heavenly.  If it’s not fresh, you can end up with something on your hands more awkward then Wiz Khalifa at a Lynyrd Skynyrd concert. Alright, without any further delay here are my Fav 5 Middle Eastern Restaurants in Mississauga.

Alright, maybe I’m bias because I have a love affair with this spot, but let me tell you from the heart, this joint has it all. From delicious sweets, to shawarma to massive BBQ meat platters that would make Boutros Boutros Boutros BOUTROS –Ghali’s family proud. All the meat is cooked in house on a charcoal grill, and it moves fast as this place is very busy, so the meat is so moist it melts in your mouth. Do yourself a treat, for a first timer at head over on a Friday evening for the full paramount experience. You will have everyone in the house, from young Lebanese Christians looking for a late night bite to eat before hitting the clubs, to large Muslim families that have just left Friday prayers and are looking a family dinner.  With so many differences in the Middle Eastern community, Paramount is one place in which deliciousness is in full agreement.

SHOUT OUT TO MY BOY SAM OSMOWS, KEEPIN’ IT REAL IN CAIRO!! Osmows is one of those success stories that real make you feel good about supporting local business. Not only is Sam is an astute business man that would bury any one on the dragons den he is a really good at making shawarma. When I say really good, I mean the guy is off the charts! Peep the Osmows Special, super size with his house made garlic sauce (which is completely different than any sauce you have ever had on a shawarma) and his home made hot sauce! It may not be traditional Middle Eastern grub, but it’s the business, straight up.

As a bone fide man of the dessert you gotta know that I love the sweets. In fact, I love sweets so much I would rather crush a pan of Baklava or Kata’if with ashta cream before any shawarma you could put in front of me and if it wasn’t for my fear of diabetes I would have Baklawa King on speed dial.  Here is a tip, if you have a Lebanese girlfriend and you want to impress her parents, grab a kilo or the mixed Baklawa, and maybe half a kilo Kata’if Assafireh before meeting them for the first time. It may set you back a few dollars, but the smile on their face will be worth it.

Set up in the back of this relatively new addition to the Arabic grocery store is a delicious oasis of Shawarma, rotisserie/charcoal grilled chicken, tabouleh, manakeesh and fried fish.  Be warned, this part of the store, while extremely  clean is very busy and can appear somewhat chaotic with men and woman trying attempting to get some of this delicious take away for their families after a day’s worth of shopping.  Do yourself a favour, grab a couple sharawma plates, some pita, and one of each of the in house made “dips” (baba ganoush, garlic sauce, hummus and mouhamara) and take it eating area at the front of the store for a garlic infused evening.

5) Tarboosh RestaurantTarboosh is located in a plaza at Confederation and Dundas. These guys are not new to the game, having been around since 1988. Tarboosh was the joint venture of two brothers who shared the idea of introducing traditional culinary secrets to the mainstream. It’s a nice sit-down restaurant that has everything from Kafta to shawarma to falafel.

So, there you have it, my take on the top 5 spots for Arab grub in Mississauga. Many of you may ask what qualifies me to review such restaurants as my last name is obviously not Arab. Well, besides the fact most of my soccer team is Arab (SUPER FC. WE GETTING THAT GOLD BABY!!!), my brother from another mother was from Lebanon, true story.. Ask Karl Wolfe, Peace.