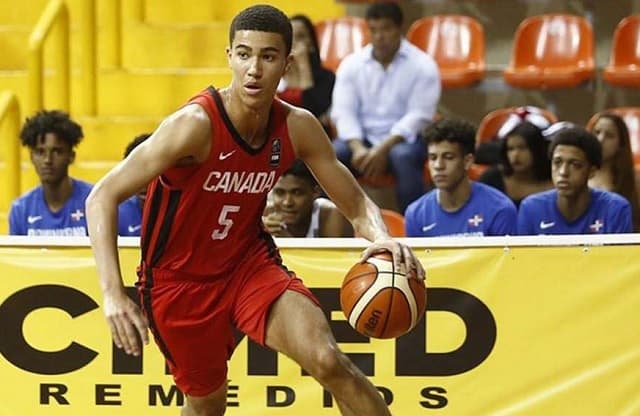 Caleb Houstan showed why he is considered a surefire NBA lottery pick while making his college basketball debut on Wednesday.

The 18-year-old from Mississauga tallied 11 points, with an effective field-goal percentage of 71.4, and contributed six rebounds and two assists in the Michigan Wolverines’ season-opening 88-76 win against the Buffalo Bulls. Houstan, a six-foot-eight, 205-pound wing, showed his buttery-soft touch on a pair of triples, and flashed some two-way ability on one sequence where he altered a shot, and ran the floor to score on a layup, as BasketballBuzz captured in a highlight reel. His second three-pointer iced the win with just more than three minutes to play.

Houstan, who grew his game with the UPlay Canada and CIA Bounce development programs, moved with his family to Florida before entering high school in order to play at the famed Montverde Academy. The prep school is also the alma mater of fellow Mississaugan RJ Barrett, who is now a starter for the NBA’s New York Knicks.

Houstan’s combination of size, savvy and shooting has elicited comparisons to the Milwaukee Bucks’ Khris Middleton. Some 2022 NBA mock drafts slot Houstan as a potential top-five pick next summer.

This past summer, Houstan also helped Canada win the bronze medal at the FIBA under-19 men’s world championship.

He’s the third pro hoops prospect from Mississauga to matriculate at Michigan in the last decade after Nik Stauskas and Ignas Brazdeikis. Stauskas was a top-10 pick in 2014 and is now in the NBA G League. Brazdeikis, who played at Michigan in ’18-19, is now playing for the Orlando Magic.