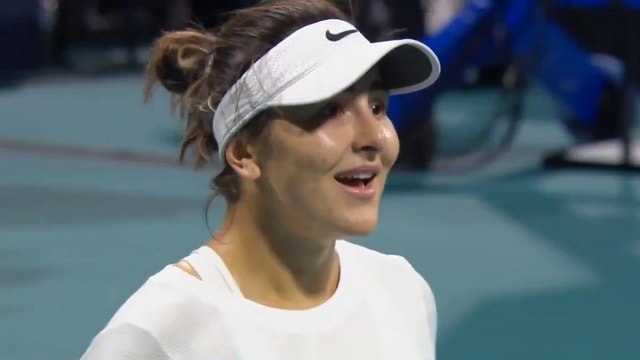 Bianca Andreescu has been on an absolute tear in the Miami Open, and her momentum will carry her all the way to finals.

The Mississauga native was able to defeat Maria Sakkari in an intense semifinal match that began on Thursday night and finished early Friday morning, according to WTA Tennis.

“Against her, I had no choice but to run for everything that I could and just fight until the end because that’s what she was doing. She was really taking control of the points a lot of the times. It was really tough, I’m not going to lie,” Andreescu said on-court after the match.

“My whole game plan was to try and do that because I knew she was going to do that, and it could’ve been either of us winning. I’m just super happy that I pulled through.”

Andreescu’s victory means she’ll be facing off in the finals on Saturday against Australia’s Ashleigh Barty, ranked #1 in the world on the WTA’s singles rankings and the winner of the last Miami event in 2019.

Andreescu said she knows it’ll be a tough match, and she’s hoping to be on her A-game.

“It’s everything,” Andreescu said, when asked why she was looking forward to playing Barty. “Her being No.1 and her doing really, really well. Her game style, as well. It’s something I have never really experienced.

“I love a challenge, and I know she’s going to challenge me on Saturday, so it’s a mixture of everything.”