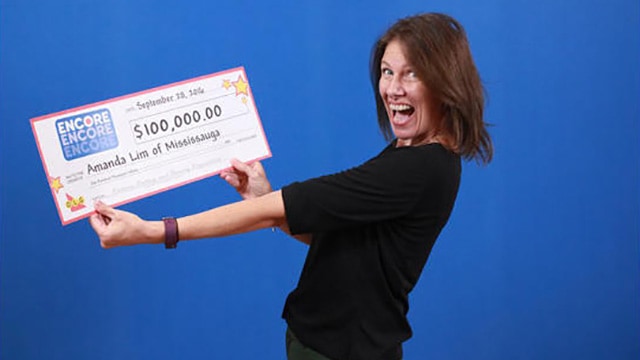 It was another lucky day for a Mississauga resident who bought a lotto ticket!

Amanda Lim is celebrating after winning $100,000 with Encore (she matched six of seven winning numbers on her selection).

“I regularly play LOTTO 6/49 and LOTTO MAX with Encore,” she said while at the OLG Prize Centre in Toronto where she picked up her winnings. “While I usually play my regular numbers, this win was from a Quick Pick selection.”

Lim, who has two children, found out she was a winner a week after the draw date.

“I was making breakfast for my kids and decided to check my numbers online. I like to underline my numbers when I check them and when I saw all the underlined numbers I had to pause for a moment and look at the ticket again. Then I asked myself, ‘How many numbers did I underline?’ I checked again and I was shocked!”

Lim and her husband made a list of things they’d like to “do, buy and accomplish” with the winnings and haven’t compared notes just yet. That said, Lim told OLG that she’d like to put a portion of her prize towards renovations, pay some bills and put money aside for her children’s education. She’s also interested in traveling to somewhere exotic and warm, like Africa or Australia.

The winning ticket was purchased at Longo’s on Winston Churchill Boulevard in Mississauga.