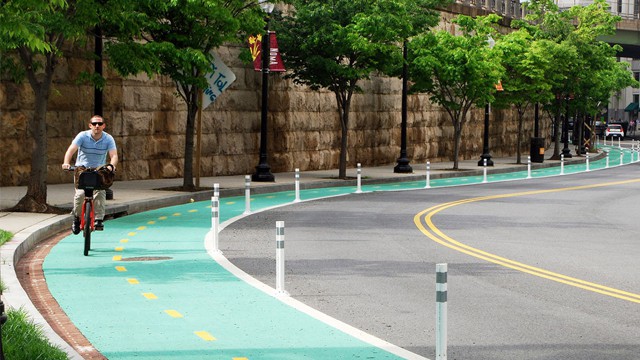 Mississauga cyclists: the city loves you and wants the province to think of you just as often as it does.

Yesterday, city council passed a resolution urging the Ontario government to use the provincial cap and trade program to provide $200 million for cycling infrastructure across the province over the next four years.

A letter of support from Mayor Crombie will be delivered to the Minister of the Environment and Climate Change and other Ontario cities. According to a city press release, the letter will encourage other cities to join Mississauga in its mission to convince the province to act.

“There is a strong interest in building and investing in cycling infrastructure to promote active and healthy living in Mississauga,” said Mayor Bonnie Crombie. “The city of Mississauga’s Living Green Master Plan and Cycling Master Plan also support the provincial government’s Ontario Climate Change Strategy to reduce greenhouse gas emissions and build a prosperous low-carbon economy. Like Mississauga, many other municipalities have similar plans and initiatives to increase their cycling infrastructure and I hope they will join our city in calling on the provincial government to increase investments in this critical infrastructure. These investments will complement those being made at both the provincial and federal levels in infrastructure such as public transit that will improve the lives of residents and reduce emissions.”

“The Mississauga Cycling Advisory Committee is very focused on the important role cycling can play in meeting our climate change goals,” said Chris Fonseca, Ward 3 Councillor and member of the Mississauga Cycling Advisory Committee. “We have implemented a very successful Community Ride Program which has increased cycling greatly throughout the city. An Ontario wide poll, Share the Road 2014, shows that 4.5 per cent of Ontario residents ride a bike at least monthly and that 54 per cent of Ontario residents want to cycle more than they currently do. The poll also indicated that many would be encouraged to cycle more if there was more and better cycling infrastructure available. Mississauga has made great progress closing gaps in our cycling infrastructure.  Closing these gaps will increase the safety of our residents and encourage more cycling as a means of transportation. An investment in cycling infrastructure will improve and enhance the multi-use trail system.”

Mississauga currently boasts over 400 kilometres of designated bike lanes, boulevard multi-use trails, off-road trails and roadways with bike route signs. Through the Cycling Master Plan, the city hopes to develop more than 900 kilometres of on and off-road cycling routes over the next 20 years.

For anyone who cycles for environmental, exercise or enjoyment purposes, the news is probably good. The rights of cyclists have been top of mind in political circles for quite some time in the GTA, so it’s good to see Mississauga eyeing solutions that will provide more and better opportunities for residents hoping to see more of the city from a vehicle that is not an automobile.