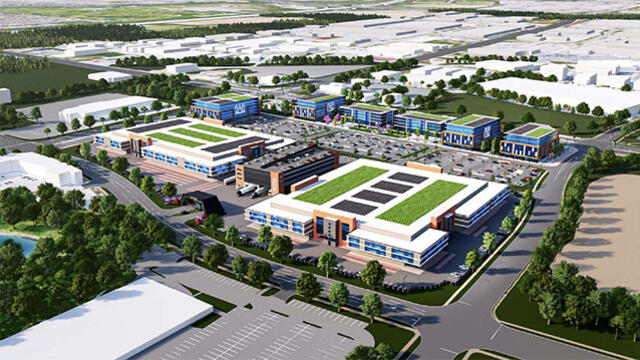 Proximity to Pearson and Toronto, cheaper rents and a film-friendly staff have already made the City of Mississauga a highly desirable location for film and television production.

Now the City is ramping up to welcome what would be Ontario’s largest film and television studio and is prepared to take a controversial step by asking the Province for a Ministerial Zoning Order (MZO) to fast-track the project.

At an April 28 general committee meeting, Studio Bottega Inc. representatives appeared before council to discuss a proposal that would bring two buildings—both spanning over 225,000 square feet—to the Maritz Dr. and Derry Rd. area.

According to a Studio Bottega report, the campus, if approved, will create more than 2,000 construction jobs and 5,000-plus operations and other ongoing positions and would generate “significant” government revenues.

David McKay, a planner with Studio Bottega, told council that securing an MZO will expedite approval of the project.
“It’s employment use on employment lands but we would save nine months of time through the order. It’s not conversion, it’s not in the Greenbelt and it will provide a public good.”

MZOs allow the province to decide what will take shape on a specific site, regardless of current zoning and the province’s final decision cannot be appealed by the municipality or local residents.

It has sparked considerable controversial during Premier Doug Ford’s regime as the Conservative government has used it approve developments on sensitive wetlands, greenbelts and agricultural lands. Critics have also been quick to point out Ford’s excessive use of the measure – he has issued 31 MZOs in the past 18 months, which is nearly double the 19 used by previous governments in the 15 years previous.

Ward 5 Carolyn Parrish said that she’s still in favour of asking the province for an MZO to get the project done.

“I’m 100 per cent in support of this. I know we’re opposed to MZOs on principle but…it won’t be some big warehouse looking thing right on Hurontario. I think it’s a great idea. We have a film and movie sector growing and this will be the icing on the cake. As the local councillor, I’m absolutely delighted with this.”

The City released a report in January of this year critical of MZOs and the Ford government’s use of them, stating they should not be used as a “blunt force tool” because they reduce the role of Council and the public in the planning process.

Ontario has issued two MZOs recently; both were for long term care homes. Council was not against the projects, the report declared, but said the processes involved “do not align with some of the City’s engineering requirements” and some “coordination and process challenges” have been experienced.

At the April 28 meeting, Mayor Bonnie Crombie said she supports the project but is unsure if the province will grant the city’s request to issue an MZO.

“We have a bad track record with MZOs,” Crombie said, referring to disputes between the Province and Peel Region in Caledon in the past two years. “If we go out on a limb and ask for another MZO, what kind of luck will we have with this? This is a great project and initiative, but my scepticism is around whether the province will grant an MZO. As much as we would like to assist, I don’t know what our ability is. I want to see this open, I think this is a great project.”

City staff said that Bottega has been in talks with the province and believes ministers are willing to accept the company’s application pending a resolution from the city and some councillors agreed, saying the chance of the province refusing the request is low.

“I think the province will jump all over this, what good news do they have going on these days?” asked Ward 11 Councillor George Carlson. “If they turn it down and punt it back to us, they’re essentially sending jobs back to [places like Atlanta]. This proposal is very good news.”

The value of the film and television sector is estimated not be worth $2.1 billion in Canada (pre-Covid) and Mississauga has been busy over the past couple of years acquiring studio space and fostering good will to get a bigger piece of that lucrative pie.

Mississauga is never going to replicate Chicago or New York like Toronto can for outdoor shots, which is why enticing indoor studios to the City – as well as companies that cater to the needs of the industry, such as equipment rental firms, FX shops and hardware stores – has been so important to the master plan.

By the end of this year Mississauga is expected to boast more than one million square feet of industrial space for filmmakers.

There is no time frame to hear from Queen’s Park regarding the MZO request but Council is hopeful they can get an answer quickly.