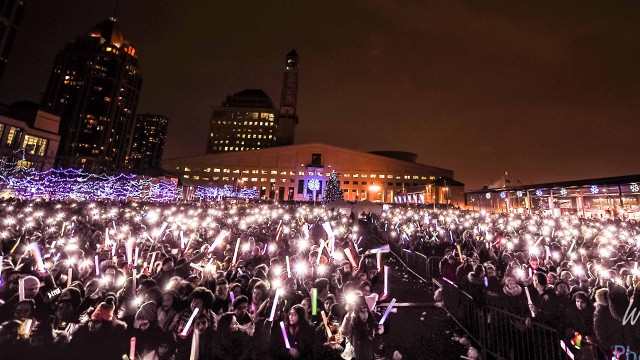 If you’re pumped to spend New Year’s Eve 2017 in Mississauga, you’ll probably be happy to know that the city has a lot on tap at Celebration Square.

Like previous years, the night will be full of food trucks, live performances and fireworks.

In terms of live entertainment, musical performers include DiRTY RADiO, Sickick and headliner Coleman Hell, a breakthrough Canadian artist who made waves with his hit single Two Heads and current #1 hit Fireproof. He won a Juno Award in 2016 for Breakthrough Artist of the Year.

After you’ve had your fill of music and delicious food, you can enjoy the annual fireworks display at midnight.

The entire night’s festivities will be hosted by insauga.com’s Khaled Iwamura and TV personality Scott Willats. The festivities will kick off on Dec. 31 at 8:00 p.m. and guests will be able to check out the insauga.com show with Khaled Iwamura and Jackie Perez and, for the first time ever, DJ Iris Santo. Come at 8pm as there will be a lot of swag thrown out to the crowd! Iris Santo is a Mississauga-raised and based DJ who has played at international music festivals (including the Ultra Music Festival in Croatia and Seoul, South Korea). She’s also a regular at Toronto hotspots the Wildflower, Muzik and CODA.

The event is sponsored by Pizza Pizza and insauga.com is the media sponsor.