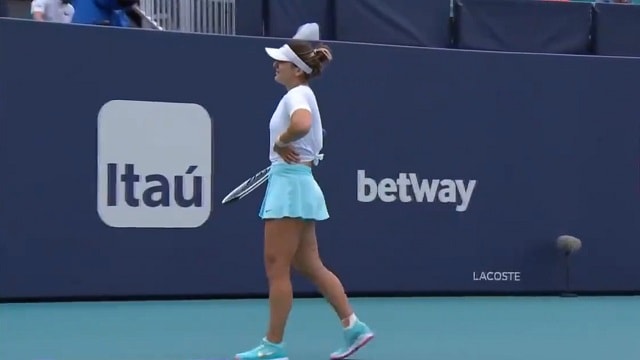 Bianca Andreescu’s amazing run at the 2021 Miami Open met an unfortunate end today due to an injury.

The final match was played on Saturday, April 3 against Australian player Ashleigh Barty, ranked #1 in the world in the WTA’s singles rankings and winner of the last Miami event in 2019.

Barty took the first set 6-3, according to the WTA. During the second set, Andreescu went wide for a forehand and ending up going over on her ankle.

She played through the set but retired two games later, ending the match with a final score of 6-3, 4-0, ret.

“2019 Miami champion Barty has now won 12 consecutive matches at the tournament, although her first-ever meeting with fellow Grand Slam champion Andreescu ended prematurely after the Canadian unfortunately suffered an injury at 2-0 in the second set, then retired two games later,” said the WTA.

Not the way she would have wanted to win it, but the top seed makes it 12 straight victories at Miami Gardens @ashbarty | #MiamiOpen pic.twitter.com/QoNRYnPVvQ

It was a heartbreaking end to the tournament for fans of the Mississauga native, who had already missed the entirety of the 2020 season due to injuries.

Miami was Andreescu’s third event in the past two seasons.

“Getting back on my feet wasn’t easy, but I continued to believe in myself and I never gave up,” Andreescu said after the match.

“To everyone out there who’s going through a tough time like me right now, I just wanna say, keep your head up and continue to believe in yourself.”

Despite the unfortunate end, the tournament was still an amazing run for Andreescu, who boasts a stunning 33-2 win-loss record in North America since the start of 2019 and is projected to move up three spots in the WTA rankings to #6 in the world.

Photo courtesy of the WTA