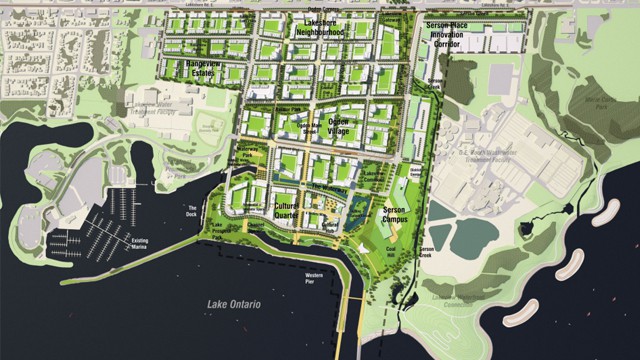 Did you know Mississauga is a waterfront city? You probably did, but it’s not a term frequently bandied about to describe Canada’s sixth largest city.

Look at the plethora of redevelopment projects around Port Credit and Lakeview: Inspiration Lakeview (see cover photo), Inspiration Port Credit, 1 Port Street, the Imperial Oil Lands and the Lakeview Waterfront Connection. There is a lot coming that will transform Mississauga’s waterfront into something more suitable for the 21st century and beyond.

Mississauga is still trying to figure out how to best approach its monumental development projects. Mainly, it’s asking how waterfront projects have worked in other cities and how the projects will affect established neighbourhoods and communities.

I went to a panel hosted by the Urban Land Institute, a think tank based in Toronto that provides leadership in responsible land use and in creating and sustaining thriving communities worldwide. While they are based in Toronto, ULI has recognized that the 905 requires their services as well. As Richard Joy, ULI’s Executive Director, explained to me, it’s about creating dialogue about issues surrounding urbanism in the GTHA (Greater Toronto and Hamilton Area), and hosting various workshops and panel discussions on issues of development and redefining how urbanism is done in the 21st century.

The ULI came to Mississauga for their annual Waterfront 905 symposium. Mayor Bonnie Crombie was asked to host a panel discussion on exploring how 905 municipalities are seeking to transform their brownfield and underutilized lands into vibrant new communities. As the ULI stated in their official event description, with developable land supply becoming increasingly scarce across the GTHA, the transit oriented Lake Ontario suburban waterfront is positioned for significant urban intensification.

While the subject matter is important, the event wasn’t necessarily open to the public. Some guests had to pay a registration fee of about $45. The event was hosted on the 12th floor of the Civic Centre and the audience was very niche; mostly it consisted of people from the real estate, development and urban planning industries. Nevertheless, when it comes to learning about waterfront development (even though things look pretty good lately) Mississauga could always use some pointers on how to implement better ideas and share some of its own successes with other jurisdictions.

The main overarching question posed to the panelists was how will the densification of these areas affect the already established communities in the GTHA? What can the GTHA learn through best practices from other waterfronts? I thought it was a fairly balanced representation based on the topic presented.

The main points discussed were:

Recognition of the Past and Building on that for the Future

A common theme among all the presenters was this idea of preserving the past and respecting it in order to build on the future. Each presenter mentioned this point in a different way, but essentially came to the same conclusion: a city’s heritage must be respected.

Giannone recognized the heritage impacts on buildings near existing communities. Given Port Credit’s previous history as a harbour port, it’s been important to respect that heritage while building. In the end, FRAM used market research and the result was that the demand was for more townhouses. That is why those types of housing became the first phase of FRAM’s developments.

Give People a Connection to the Waterfront

People seemed to agree that in order to get people to the waterfront, you have to give them access to it and a reason to go. Giannone went on to say that his company utilized placemaking concepts to create an identity distinctly for Port Credit, such as FRAM’s Port Credit Market development. Port Credit was its own town after all, and even today maintains a unique identity .

If you want people to go to the waterfront, you have to make it worth their while and give them something to do or see in the area.

Working With All Parties

Here’s where the discussion gets interesting; I thought Giannone said something more insightful and revealing than the others. As you may know, there has always been a natural tension between developers and the public (i.e. NIMBYism issues when new developments are proposed). Giannone said the key was not to outright alienate local residents; but invite them to engage in the process and try to find something they can tolerate.

Other panelists said there needs to be a partnership and cooperation between both developers and the public/city interests; developers don’t go out their way to be an enemy. Phillips put this in a more direct way by showing how Hamilton committed $80 million to waterfront revitalization to give the private sector an incentive to invest and bring them to the table. In other words, put up the money first. What private sector wouldn’t say no to that kind of a deal?

How does any of this advice help Mississauga?

The only major question that Mayor Crombie posed to the panelists was would you recommend what you’re doing in Hamilton or North Vancouver for Mississauga?

Giannone said that if you’re contracting out several pieces of land, you need a development corporation. Phillips said in the case of Hamilton, it worked because they treated the private sector as a partner. Penway offered a unique perspective; North Vancouver had only one developer to deal with, but said you need strong vision to provide leadership. Finally, Emma West said a development corporation is not absolutely necessary; it depends on how large the area is.

All in all, I found it a fascinating discussion for a topic that is quite important but rarely mentioned.

Do you feel involved in the upcoming transformation of the city’s waterfront? Do you think Mississauga is doing its best to seek the greatest possible advice from experts while continuously consulting with the community?