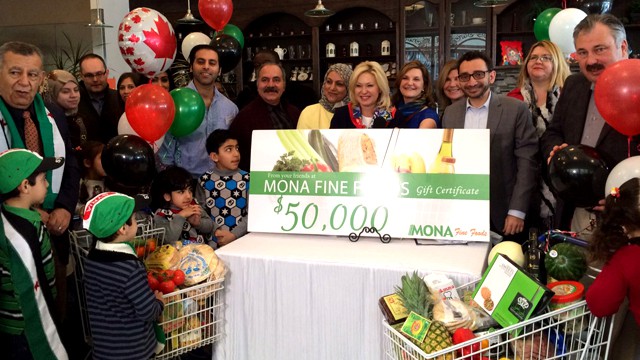 To the entire Abdulwahab Family including Ma’an, Amal and Ziad, I would like to thank you on behalf of the residents of Mississauga for taking the initiative and launching this generous grocery store voucher program in support of refugee families, Mayor Bonnie Crombie said on Saturday.

Today’s event was a symbolic cheque presentation made by Ziad Abdulwahab in recognition of his family’s efforts and company’s initiative to work with trusted local community partners to distribute the vouchers, which also include:

The event took place at Khan Murjan Café & Bakery owned by Mona Fine Foods. MP Alghabra, Mayor Crombie and Shelley White, President and CEO of the United Way Peel Region were among the many in attendance.

Mayor Crombie said “Like the announcement of today’s grocery voucher program by Mona Fine Foods, the Syrian refugee crisis has brought people together, to work toward the common goal to help those unable to help themselves.”

“An immediate action item from this meeting was to work with Lifeline Syria to set up a Mississauga Lifeline Syria Fund. The fund is up and running. It will make grants to registered charities to pay for costs associated with sponsoring and settling Syrian refugees to Mississauga and the GTA.”

“In October, we opened the doors of City Hall and invited all residents to participate in a Lifeline Syria Sponsorship Session. This information session was an important opportunity for residents to better understand how they can do their part to support the thousands of families fleeing violence.”

“In November, Council endorsed my motion calling on the Region of Peel to urgently develop a comprehensive action plan to coordinate efforts to accommodate the influx of Syrian refugees.”

Every step of the way the residents and community groups – like the United Way Peel Region – have been the ones who have turned ideas into results, Mayor Crombie said.

Mayor Crombie concluded “Thank you again to the Abdulwahab Family and the staff from Mona Fine Foods. For many refugees, your acts of compassion are some of the first introductions refugees will have to Canada, and the Canadian way. All of Mississauga and Canada takes pride in what you have done.”