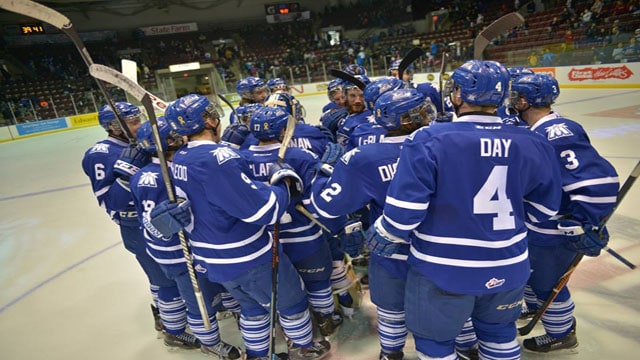 The Mississauga Steelheads have a big night ahead of them.

The puck drops at 7:30 p.m. at the Hershey Centre to open their Ontario Hockey League season against close rivals the Hamilton Bulldogs. This is the fresh start the Fish are looking for to shake off the rusty 3-1 preseason.

The Steelheads have big expectations to fulfill as they’re touted to be the big fish in the Eastern Conference pond. And for good reason — Mississauga has an edge with six NHL-drafted players, a few top prospects that will be ripe for the picking in the next few drafts. They also have a leader between the pipes in newly acquired starting goaltender and former OHL Champion Matt Mancina.

This is a hockey team to keep an eye on.

They’re projected as the seventh best team in the Canadian Hockey League. The list puts the Steelheads in the company of the Windsor Spitfires and the mighty defending Memorial Cup champs the London Knights.

What makes the line up particularly exciting is their defensive core that is set to shake up the league. NHL prospects Austin Osmanski (Buffalo Sabres), Sean Day (New York Rangers), Vili Saarijärvi (Detroit Red Wings) and Jacob Moverare (Los Angeles Kings) have the potential to run the show and keep threats out of the zone.

On the offensive side, the Steelheads pack a punch with veteran’s captain Mikey McLeod and Nathan Bastian as well as the 2015 OHL draft top five draft picks in Ryan McLeod and Owen Tippett.

Just don’t expect a full roster quite yet.

Thanks to the World Cup of Hockey, the start of the NHL training camps has been delayed and seven of Mississauga’s players who made it past NHL rookie camps won’t be able to join the roster for tonight’s season opener.

Moverare, Osmanski, Day, Mikey McLeod, Bastian, Saarijärvi and Stephen Gibson have been invited to various NHL main camps and likely won’t be available until after this weekend.