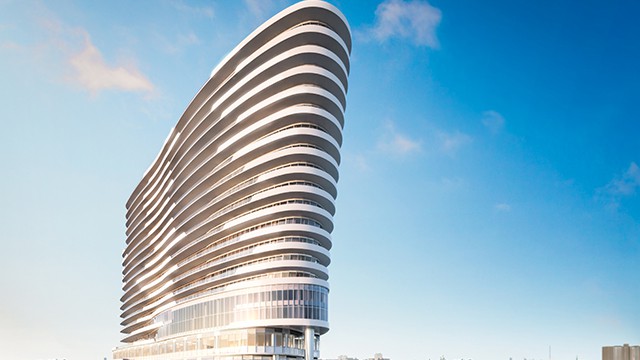 The urbanization of Mississauga is continuing with the emergence of another stylish, modern high-rise condominium.

While City Centre has been the focus of most condo developers, some companies are looking beyond Square One to fast growing neighbourhoods in need of sleeker and more urbane skylines. With the Erin Mills area growing fairly rapidly, Daniels has cornered the market and erected three buildings in Erin Mills Parkway and Eglinton region. The brand built the West Tower Residential Condominiums and the Skyrise Rental Residence in the neighbourhood and is about to put its third Erin Mills property — Arc Condominiums — on sale.

“We have very deep roots in this [neighbourhood],” says Daniels spokesperson Dominic Tompa. “We’ve been building there since the 80s.”

When we say Daniels has the market cornered, we don’t mean it simply boasts more buildings than other developers. It has a literal community in the area, known as Daniels Erin Mills. The company calls the area a “mixed use” community designed for residents who want to “live, work, play, grow and shop” in and around their home.

Targeting the growing Erin Mills area is wise. For years, the sleepy neighbourhood was content to be home to Erin Mills Town Centre, Credit Valley Hospital and pockets of family homes. There was ample living space, but not a lot of options for play (unless you count the long-dead EMTC mini-golf course and Montana’s). With EMTC being reinvigorated by a dramatic facelift and more shops and restos popping up in the community, the time to further urbanize the evolving space was ‘nigh.

While some people shake their fists at any new skyscraper, it’s hard to deny that Arc is going to look pretty cool.

“The design is very unique,” says Tompa. “It has a luxury cruise ship feel, so it’ll be unique for the skyline. It has a lot of character. We’ve got 15,000 sq. ft. of retail space and two floors (or 50,000 sq. ft.) of office space [going into the building]. People will be able to work and shop there.” When Arc is built, the three buildings (Arc, West Tower and Skyrise) will share an exclusive space that will boast an outdoor courtyard, gardening plots, a running track and more.

“It’ll anchor the community,” Tompa says. “We’re bringing in the farmer’s market as well. Backyard Farmer’s Market will be in the plaza area in the base of the Arc.”

In terms of amenities, Arc’s offerings are not dissimilar from other Mississauga high-rises. Residents can expect a full-court gymnasium, fitness centre, outdoor terrace with barbecues, a bookable lounge and meeting space, a smaller lounge with comfy seats and a bookable party room.

As far as prices go, people shopping for affordable condos will be pleased to know that some units start in the low 200,000s. In terms of design, features and finishes are selected by interior design company HOK and the uniquely-shaped suites (which will be influenced by the curvaceous design of the building) will boast nine foot ceilings, laminate flooring, quartz countertops, custom-designed cabinetry with soft-close drawers and stainless steel appliances.

In terms of demand, Tompa says Daniels is seeing a lot of interest.

“We’re just starting to be out there with the building itself and a lot of people are waiting for it to come out.”

Since Daniels has been present in the area for three decades, Tompa has noticed an interesting trend in terms of demographics. Rather than primarily attracting first-time homebuyers or singles, the condos are appealing to long-time residents who are ready to downsize within their long-term neighbourhood.

“It’s really interesting, we had a lot of local buyers who wanted to downsize to West Tower,” he says, agreeing that Daniels has, in this case, sort of been able to follow and adhere to the lifestyle requirements of residents moving through the lifecycle. “You can walk to the hospital, which is good for people who have retired. It’s across the street from the mall and restaurants. It’s a really nice location and even though it’s Mississauga, you could live here and not need a car.”

For those interested in purchasing a unit, registrants can join the Arc Condominiums Inner Circle by visiting the website. Inner Circle members will receive an invitation to attend the first advance sale before the public gets a kick at the can. They’ll also get a more comprehensive selection of suites, floors and views. If you’re interested in joining, expect to pay a one-time fee of $300. That $300 will be applied towards your purchase or, in the event you decide not to buy an Arc suite, refunded in full.

As for the retail space, Tompa says Daniels does its best to curate the occupying businesses to suit resident’s needs.

“We try to curate a community. You need a place to shop and be entertained and play. It’s a place to spend your time. The east side of Arc will have the retail space and it’s a little too early to know who will occupy it. There [will be] a restaurant at the base and a pharmacy. We try to get the right fit for the community.”

As for when units will go on sale, Tompa expects people will be able to start purchasing in late May or early June. The building will offer everything from studio suites to three-bedroom units.

“There’s a growing demand for three-bedroom units. Some people are coming from 200,000 sq. ft. houses and still want the extra space and other [residents] are families with children. We’re recognizing and accommodating that demand.”