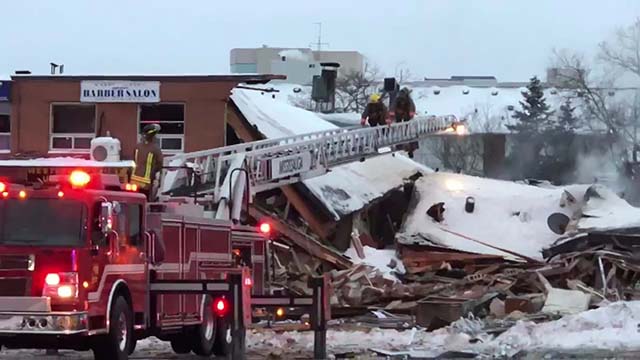 A Mississauga high school will remain closed for the time being following an early morning explosion in a nearby plaza.

The Peel District School Board (PDSB) recently announced that TL Kennedy Secondary School, located near the blast site, will be closed to staff and students on Monday, Feb. 12.

PDSB says the closure is precautionary in nature.

Peel police said they were called to the scene of an explosion in a commercial plaza in the Hurontario St. and Agnes St. area around 7:28 a.m. this morning.

Peel Paramedics said that three people were taken to hospital after the explosion. One male was transported with serious but non-life threatening injuries.

Mississauga Fire and Emergency Services Fire Chief Tim Beckett told reporters that the three victims were rescued by firefighters after they climbed onto the roof of the building.

Beckett added that half of the building collapsed due to the blast.

Multiple residents have been displaced as a result of the incident.

“The City has opened Mississauga Valley Community Centre as a warming station. The Red Cross, Peel Human Services and the City’s Emergency Management team are at the Community Centre to assist those residents and business owners who are directly affected,” Mississauga Mayor Bonnie Crombie said in a statement released shortly after the incident.

“More details will be available in the coming hours and days, but I want to thank Mississauga Fire, Peel Region Police, Peel Paramedics and all first responders for their work onsite today and their quick response to this incident.”

Peel police Chief Jennifer Evans spoke to reporters at the blast site and said that it’s too early to determine the cause of the blast or comment on whether or not it’s suspicious.

Beckett told reporters that emergency crews were in the process of determining the financial toll of the damage.

The City of Mississauga says that heavy smoke remains in and around the Hurontario/Dundas area.

Residents in the area are advised to keep their windows closed.

Photo courtesy of The 4K Guy