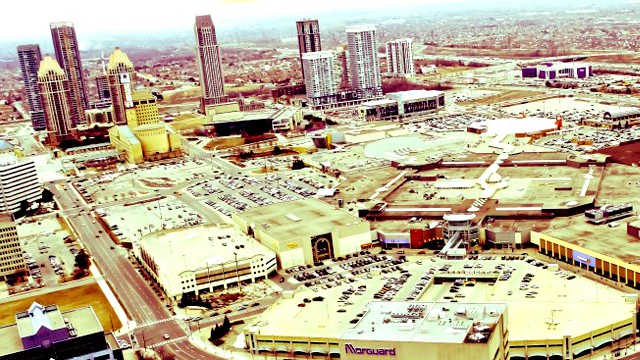 While COVID-19 has been the focus of almost every government in the world, there will come a time when the virus is contained and other concerns–such as affordable housing–become increasingly more important.

At an April 22 council meeting, Mississauga councillors and staff members raised significant concerns about the province’s new Community Benefit Charge (CBC), a charge they say could make it more difficult to incentivize developers to include parkland and other features in their projects.

The city also said the charge could put the onus on taxpayers to pay for growth in the city, as developers will not be required to pay enough to cover the additional infrastructure necessary to build “a complete city.”

The city said the charge could also make it more difficult for Mississauga to encourage the creation of affordable housing.

An illustration of the impact on parkland allocation under the proposed Community Benefit Charge (CBC) on a hypothetical 2,000 unit development in Mississauga’s downtown. Left image under current legislation; right image under proposed CBC. Taken from the April 22, 2020 presentation to Mississauga City Council by Jason Bevan, Director of City Planning Strategies.

As for how the proposed charge will work, the CBC will combine three existing city revenue streams into one charge. The city says the CBC would take the place of parkland dedication and cash-in-lieu, certain soft service development charges and density bonusing. The CBC is proposed to be capped at 10 per cent of land value for the City of Mississauga and five per cent for Region of Peel.

“The principle of growth paying for growth has always been the foundation of how we build our city,” said Mayor Bonnie Crombie in a statement.

“The proposed CBC could result in us not having the powers and resources needed to build complete communities without using significant tax dollars to do so. Those who develop in our city have an obligation to contribute their fair share to the new infrastructure that is needed – parks, roads, water and much more – so that existing taxpayers don’t have to pay for new growth. Cities know what needs to be built and where; we see the entire city, not just one development. We need the power to build a complete, healthy city where everyone can afford to live, work and play.”

The proposed change is part of Bill 108: More Homes More Choices Act, which received Royal Assent on June 6, 2019. Bill 108 was enacted to encourage more development, as the lack of housing inventory in the province has kept home prices high.

The city says the proposed CBC regulations will make it harder for Mississauga to acquire physical land for parks from developers, particularly in high-density areas. The city also says regulations will make it more difficult for Mississauga to fund affordable housing, public art, cultural infrastructure and other services which were previously funded under density bonusing.

“At a time when we are grappling with the unprecedented financial impacts of COVID-19, the proposed Community Benefit Charge will leave Council even more difficult decisions,” said Janice Baker, City Manager and Chief Administrative Officer, in a statement.

“We need a sustainable revenue stream that ensures the necessary infrastructure to support growth is fully and fairly funded.”

City staff has forwarded the report outlining its concerns to the Environmental Registry of Ontario.

A council-endorsed version of the report, along with additional comments from council, will be sent to the Ministry of Municipal Affairs and Housing for their consideration.