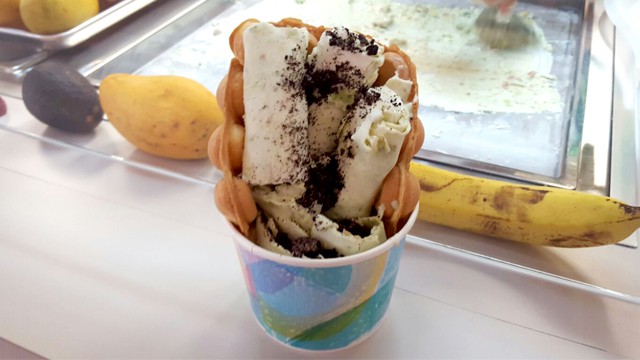 Wow Wow Yum Yum is not only Mississauga’s first Thai ice cream roll shop but it’s also the first in the GTA and possibly Canada (there are only two other ice cream roll shops known in Canada – one is in Montreal and the other in Toronto) where you can try this delicious hand-made ice cream. It’s literally made by hand!

Thai ice cream rolls are also known as fried ice cream rolls, stir-fried ice cream or ice pan ice cream. It’s a street food craze popular in Thailand. Videos of Thai street vendors started trending on Facebook and YouTube a few years ago and more recently it has made its way to NYC with a few shops that opened up last year.

According to Wow Wow Yum Yum’s owner, Jen Lam, the name was chosen for the wow factor of trying ice cream in a whole new way and the yum factor because it’s so yummy! Her family is located in both Thailand and Vietnam and operate Thai ice cream roll stands. She decided to bring this trend to Sauga and opened up shop a few months ago.

The process to make the rolls is hypnotic and quite laborious. It involves a lot of elbow grease, a frozen pan-like contraption, and two metal spatulas.

I tried the avocado and dried coconut with taro (Asian root vegetable that has a sweet and nutty taste) ice cream roll with a freshly made bubble waffle (popular spherical waffle from Hong Kong).

The ice cream roll master cut up a fresh avocado which are lined up in the front of his station along with other fresh fruits. He added the avocado to the liquid blend of milk and cream, dried coconut and taro pieces then poured it on top of the frozen pan. He then continuously mashed and diced the mixture in quick-succession until a paste-like consistency formed then spread a thin layer of the mixture across the pan. Lastly, he scraped up the thin layers to form numerous rolls.

The texture is rich and creamy with surprise pieces of avocado and taro. The taste is reminiscent of a Filipino version of a frozen dessert called buko ice candy which is made with similar ingredients including condensed milk and packaged like a freezie or India’s version of a popsicle called kulfi, also made with similar ingredients sometimes with added nuts and spiced with cardamom. Thailand’s version takes the win in the showmanship category.

Lam’s Thai ice cream rolls are made with fresh ingredients including a combination of both cream and milk, a variety of fresh fruits and other ingredients such as Oreo cookies, taro, red bean, and matcha. She offers 24 different flavours listed on her chalk board menu but you can also create your own custom flavour.

I’ve actually thought about what my last meal on Earth would be if I was given warning of a zombie apocalypse and a few things come to mind. I can’t just have one meal and it would have to be a series of my favorite things to eat throughout the day shared in a big feast surrounded by those I love.

My long list would include all of my favorites including ice cream, but not just any ice cream, it would have to be Thai ice cream rolls! I haven’t been to Thailand yet, but I can say that I’ve tried their ice cream rolls and I will be back for more!