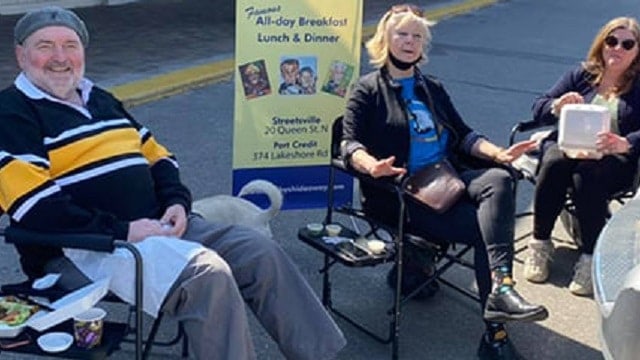 With indoor dining and patio dining still prohibited by the province, some restaurants in Mississauga are getting creative and finding new ways to serve their customers.

That includes popular breakfast spot Bobby’s Hideaway, which has started letting diners tailgate outside of their Streetsville and Port Credit locations.

For those who aren’t familiar, “tailgating” in this context means enjoying a meal from the back of a parked vehicle (although it’s usually been done at sporting events rather than outside of restaurants).

“As you’ve probably heard, we can’t open our patio for (at least) another two weeks. But… there are no rules against tailgating,” said Bobby’s.

Bobby’s is inviting customers to either bring their own tables and chairs — or borrow them from the restaurant — and get their food brought directly to their car.

The restaurant is one of Mississauga’s most beloved all-day breakfast joints, having been voted Streetsville’s most popular breakfast restaurant for several years.

With the days getting warmer and sunnier, diners across the province are clamouring for patios to reopen, but it’s not yet clear when they’ll be allowed to by the province.

While many health experts have suggested outdoor activities are mostly safe due to a significantly reduced risk of transmitting COVID-19, patios remain closed until at least mid-June at the earliest.