Mississauga Residents “Stressed and Worried” About Being Evicted From Their Neighbourhood 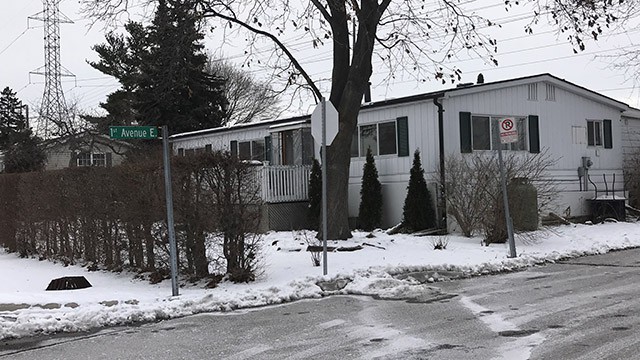 When people think of trailer parks, they typically envision one of two things: the southern United States or Trailer Park Boys.

Few people know that Mississauga is home to a vast and long-standing mobile home park that’s been quietly occupying a sizeable 23-acre chunk of land in the city’s east end since 1949. The Twin Pines park, located on Dundas St. E. just west of the 427, is home to well over 200 mobile houses and a not insignificant population of residents–many of whom are senior citizens. 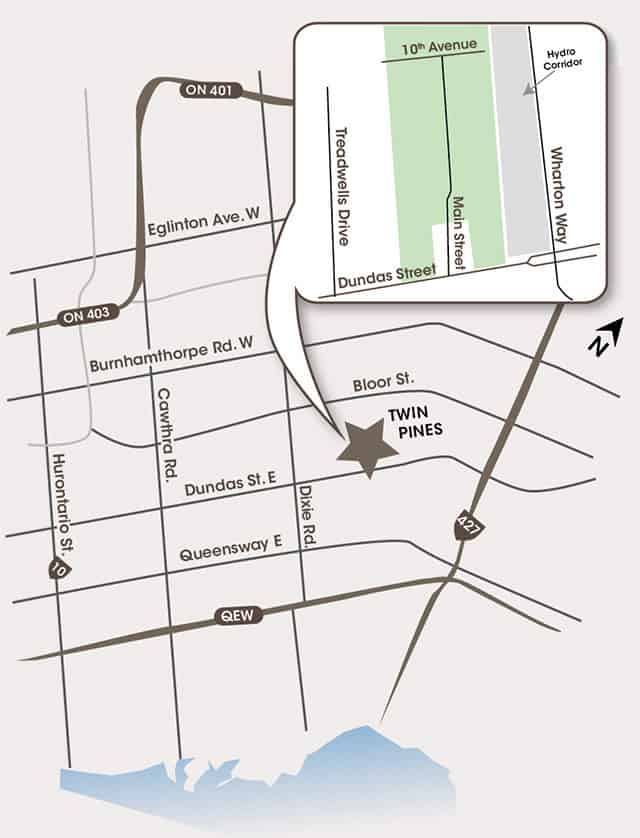 In fact, it’s slated to undergo massive redevelopment–something residents are equal parts devastated and furious about.

“We sold our home in Etobicoke because the kids moved out. We were looking around and looking around and we had a tough time finding this place, it was so hidden. Nobody knew about it,” says Alvarino Cedros, a retiree who purchased a home in the community nine years ago with his wife, Fatima.

The Cedros’ have lived in two different Twin Pines homes and remodelled both.

“Once we got in, we purchased a home on the other street and remodelled it and then found this one. It’s an investment, basically. Back then, the Region of Peel was in love with us because we were young and coming in and buying a home and remodelling it. They said we were putting value in the park. Now they’re telling us they’re going to develop this place for housing.”

As mentioned earlier, Twin Pines dates back to 1949, when the first mobile homes were established on the Pallet Family’s apple orchard. Originally called Cedar Grove, the park expanded during the installation of the nearby Trans-Canada pipeline when workers needed affordable housing close by. The tenants owned their mobile homes and paid rent to the owners of the land.

The mobile homeowners at that time and Peel Living came to an agreement that ensured tenants would not be required to vacate the park for the purpose of redevelopment for a period of 20 years. That agreement expired in October 2016.

Prior to the expiry, residents paid the Region a one-time fee of $3,500 for the land itself.

“As members of the [Twin Pines] board, we had to deposit $3,500 to Peel. We had an agreement that ran out and they just returned our money. We couldn’t purchase the park.”

Now, the future of the residents of the long-standing trailer park community is uncertain.

Peel Regional Council recently voted to dismantle the mobile homes to make way for a new housing development that will consist of both affordable and market-priced townhomes and apartment buildings.

Although the project will displace current residents (albeit temporarily), it has been a long time coming and the initiative, though controversial, will (ideally, at least) create significantly more units (some of which will also be affordable) for both current residents and anyone else in need of less costly housing.

As for what will happen to current residents, the Peel Housing Corporation (PHC) is offering each household (not each individual resident, to be clear) $31,000. The value, which was decided upon following an appraisal conducted in November 2017, can be put towards a unit in the new development that will inevitably take Twin Pines’ place once the community is closed and subsequently demolished. 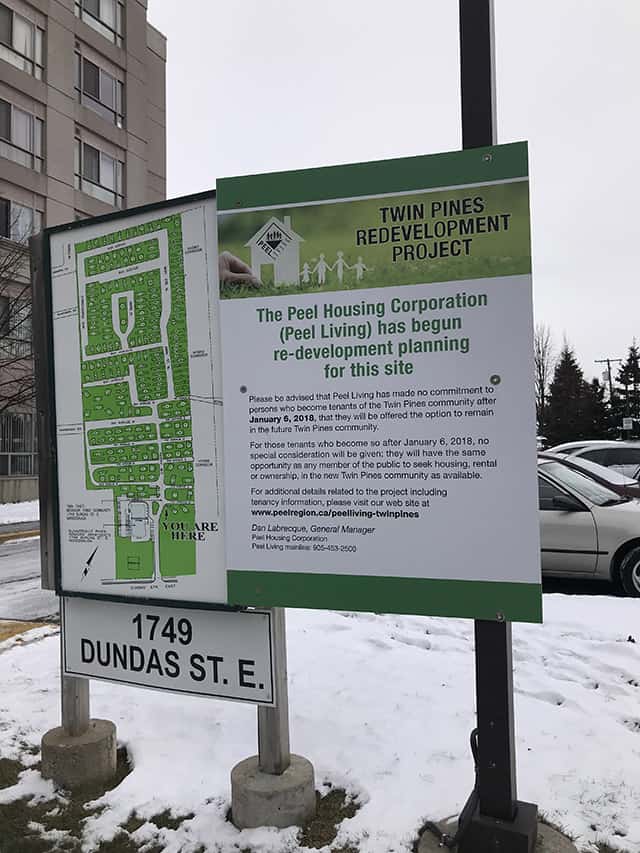 Residents are also free to take the $31,000 and move elsewhere or enter into an affordable housing lease that’s geared to their current income.

The payment is considered a “goodwill” or “ex gratia” payment.

And while this change is still troubling residents, it’s not entirely unexpected–in fact, it’s 20 years in the making.

In December 2017, the Peel Living Board endorsed the Resident Transition Plan (RTP), including housing options and a payment amount to support residents through the development.

“They offered us $31,000 for each home. Two years ago when this started brewing, Peel sent their own people to meet with us and evaluate our properties independently. They asked about renovations and advised us to keep all our bills,” says Cedros.

“Now they don’t look at that. It doesn’t matter if you renovated or not, which we think is wrong.”

Cedros and his wife say they spent over $80,000 on their current home, a sizeable two-bedroom house with a covered driveway.

Although the park contains an abundance of affordable housing, the homes are fairly spread out and some are separated by vast, wide roads. By adding townhomes and apartments, the 23-acre space could indeed house significantly more residents–many of whom are in dire need of affordable housing.

As far as less costly housing goes, Peel made a decision in 2012 to pursue development of the site to address the affordable housing needs in the region and the unsustainable ageing infrastructure throughout the site. The region says it continues to evolve the process with the residents as part of the current redevelopment project.

“The Twin Pines Resident Transition Plan endorsed by the Peel Housing Corporation Board was developed with current residents to support their transition and meet our commitment to provide them with an affordable housing option in the redeveloped Twin Pines community,” said Gael Miles, president, Peel Housing Corporation, in an email to inSauga.com.

“We look forward to continuing to work with our communities to build and support sustainable and affordable housing for generations to come.”

But while the Region has a predetermined plan to handle the situation, that plan is deeply upsetting a number of residents, many of whom have invested all they have in homes they initially purchased for well over $31,000.

Rental rates are also high, with even smaller units costing tenants about $1,200 a month.

And while more affordable housing is planned for the area, the fact remains that it’s pretty cheap to live at Twin Pines.

“Where else can you go and get this,” says Cedros. “With land and taxes and water, we pay about $550 a month.”

As for whether or not residents can move their homes elsewhere, that would be exceedingly difficult–if not impossible–when considering the size of some units and the fact that no other areas in the city (or even beyond it) could accommodate them.

“These houses are not mobile anymore,” says Cedros.

As for what residents want, the Cedros’ say that while some just want to be fairly compensated for their homes, others want the Region to leave the community alone.

“This place is sustainable. We know it’s sustainable. They have other properties in the city, they could build elsewhere,” he says.

“I see people here with their heads down. The frustration and the pressure is tremendous. I don’t think this is fair.”

Cedros thinks that, since the community is home to mostly seniors, it might be more prudent to simply close units as residents pass away or move. As of now, Twin Pines is still dotted with for sale signs, indicating that some people are still attempting to sell their homes before the project commences.

Whether or not the units will sell is another issue, as there’s ample signage warning prospective buyers that the property is slated for redevelopment.

“Four or five years from now, about 50 per cent of these people won’t be here,” he says, before saying that the Region should consider Twin Pines a heritage property.

“There’s nothing like this anywhere else. It’s beautiful on its own,” he says. “There are no options for where to go while it’s under construction and the $31,000 won’t last. People are fighting for the proper value of their home, but mostly for this place to stay.”

This redevelopment plan is coming forward during some interesting times in Mississauga. Dundas Street is set to go through massive changes in the coming decade with the city’s implementation of the Dundas Connects plan that will transform Dundas into a “super street,” accommodating a mix of transportation modes.

With such a massive infrastructure redevelopment plan on a major artery through Mississauga, it was never in doubt that some redevelopment of existing properties and sites along Dundas would come to fruition. And with the region and city pursuing ambitious affordable housing plans, the focus on Twin Pines isn’t particularly surprising.

That said, residents are sad to lose what Cedros says is a special community.

“It’s stressful. We downsized to have a smaller place for us that was liveable and so we could get ready for our old age pension. And now, we have to start over again. Here, everybody knows one another. Everyone looks out for one another. People watch out for your house when you go away on holidays.”

As for what will ultimately replace the mobile homes, the region says the project team is preparing requirements to be included in a Request for Proposal to select a development partner. The RFP was released in 2018.

–With files from Ashley Newport and Alan Kan