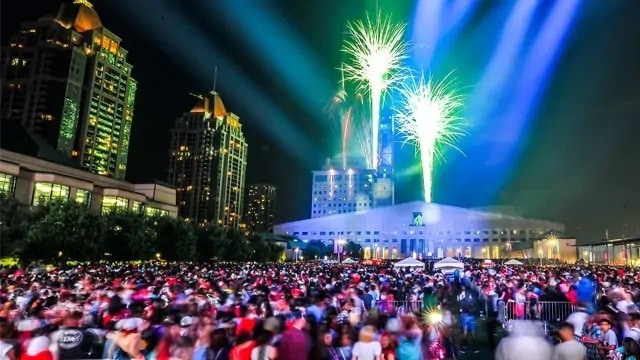 Some Mississauga residents are reacting strongly after word earlier this week that the huge New Year’s Eve party at Celebration Square had been cancelled amid growing COVID-19 concerns.

Shortly after the City of Mississauga announced it was calling off the organized events for New Year’s Eve, including the popular fireworks display, scores of residents took to social media to express both agreement and disagreement with the move.

City officials say they made the decision in response to a surge in COVID-19 cases and the more transmissible Omicron variant.

Many who commented on a discussion thread on Reddit suggested it doesn’t make sense to cancel or scale back an outdoor gathering, where spread of the virus is much less, and send people back indoors.

One commenter wrote in response to that notion: “To everyone saying this doesn’t make sense, how can you actually think that packing hundreds of people into Celebration Square is a good idea? Omicron is so contagious y’all. Yes, being outdoors is less risk, but it’s still a risk. Just stay home with your immediate family/close circle. It’s really not that big of a deal.”

With the recent surge of #COVID19 cases, we’ve made the difficult decision to cancel our New Year’s Eve activities and fireworks display. We’ll miss ringing in the new year with you, but your safety is our top priority. For more information, visit https://t.co/qNGpKUeYLr. pic.twitter.com/zhBqVctl45

Another contributor on the discussion thread felt the festivities, fireworks and all, should go ahead as planned.

“Hospitalizations are down, deaths are down from the first wave, so who cares? If people are vaccinated, this (new variant) is like a mild cold. If they’re unvaccinated, then let them die. It’s their choice. I’m tired of these unnecessary restrictions because of case counts, which don’t mean anything.”

A person upset that tonight’s Celebration Square party was cancelled pointed to inconsistencies in messaging from officials.

“They might as well mandate staying at home from work then. I don’t see why I have to go to work, but I’m not allowed to do anything in my spare time whatsoever. It’s not that I’m anti-vaxx or mandates (got my two shots immediately and have my booster booked already), just be consistent with the messaging.”

The following commenter wondered that with everything else being affected to such a degree by COVID-19, “…I don’t see why some are surprised. Have they not been watching the news? Stores, restaurants and gyms have been reduced to 50 per cent capacity. Hospitals are struggling because many nurses have either quit or are off on leave after being worked to death…thousands of flights are being cancelled daily because they don’t have enough crew members for the planes. There are so many cases, people have to wait a week for tests and results. Hundreds lined up on Christmas Day to get booster shots, hundreds more wait in line for hours in the cold to get rapid testing kits. And people are complaining because of what? Because they can’t cram together with a thousand other people on New Year’s Eve? Smh. Maybe, just maybe, now is not the right time.”

A friendly reminder that although the New Year’s Eve activities and fireworks are cancelled tonight at MCS, skating and food trucks will be open until 11 pm. pic.twitter.com/C84cA2t4kr

City officials said their decision wasn’t an easy one.

“This was a really tough decision to make, but absolutely necessary to keep our residents safe. When we made the decision to host New Year’s Eve, the situation with COVID-19 was much more stable,” said Jodi Robillos, the City’s commissioner of community services, adding the annual New Year’s Eve party typically draws huge crowds.

Still, there will be people at Celebration Square tonight. The skating rink is open until 11 p.m., and food trucks will be operating on-site.

Anyone on the Square after 11 p.m. will be encouraged to head home to watch a virtual countdown.

No reservations are required for the skating rink at this time, but City staff will be closely monitoring capacity.

City officials remind people that they are not permitted to set off fireworks at home tonight. Such displays are only allowed on Victoria Day, Canada Day, Lunar New Year and Diwali.

Reminder #Mississauga: fireworks are not permitted today without a permit as outlined in our fireworks by-law.

✔️Keep our community safe by following #fireworks rules, which includes having already applied for a permit.